It's a madness plague, Galvatron! If one of those Transformers touches you, you're infected.Rodimus Prime to Galvatron about the Hate Plague. 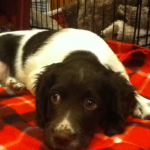