The Evil Wiki
Register
Don't have an account?
Sign In
Advertisement
in: Mature, Prisons, Evil Lairs,
and 5 more

A Nightmare on Elm Street 5: The Dream Child (fully appeared)

Psychiatric hospital for the criminally insane

Outside Springwood in Ohio, U.S.A.

To incarcerate and institutionalize the worst of the criminally insane.

To serve as the tomb of Sister Amanda Krueger.
To be remembered forever as the birthplace of Freddy Krueger.

The Hathaway House is a former hospital once used and maintained by an unnamed religious Catholic sisterhood to institutionalize the criminally insane. First briefly mentioned in A Nightmare on Elm Street 3: Dream Warriors fully featured in A Nightmare on Elm Street 5: The Dream Child, this early 20th century American asylum which was located outside the tormented town of Springwood within Ohio, U.S.A., was connected to what happened to the mysterious nun Sister Amanda (now renamed in Christ as Sister Mary Helena), and most shockingly, it was the birthplace of the unholy dream demon Freddy Krueger.

In the 1940s, during the time of the Second World War, this building was under control by a religious order of nuns who cared for the mentally ill. At the time it was presumably the state asylum as well due to its size.

It changed its name to "Fairview Hospital" after the unfortunate torture and rape of one nun, Sister Mary Helena (formerly known as Sister Amanda Krueger) by a hundred criminally insane men incarcerated in one of the asylum's cells after she was accidentally locked by the unsuspecting hospital guards a few nights before Christmas Eve in the 40s, and this incident would later lead to the birth of Frederick Charles Krueger, better known as Freddy, who was also known by another alias, "Bastard Son of 100 Maniacs".

Most interestingly, within the Hathaway House was a chapel where the sisters of the same spiritual organization congregate and pray to God for guidance and solace, was the same area whose structure including colorful stained glass windows and a huge center altar incorporated into Freddy's twisting and vast "Wonderland" where he and the new and opposing Dream Master, Alice, before she destroys him and freed the souls of his many victims including Kristen, Kincald, Joey, and her late brother Rick. Yet, all that remains his entire clothing, his dirty brown hat, and his forever infamous razor-sharp glove, lying down on the floor of the old asylum's church.

It was closed some time after the same Sister, Amends, hung herself in the hospital's tower several years later, in spite of the fact she knew from the very Christian beliefs she hold dear, if committing the sin of suicide would doom her soul to eternal torment. Beyond that not much is known about the old institution other then a few facts that remain to this. It is presumed that it was once constructed under the direction of a Doctor Hathaway around the turn of the century but no evidence has been found to support that claim. Westin Hills Psychiatric Hospital was established some time in the late 1980s while the the old Fairview Hospital was by decommissioned and empty for a long, long time.

The actual date of Fairview Hospital's closing is presumed to be some time between A Nightmare on Elm Street 3: Dream Warriors (as Nancy Thompson's colleague Dr. Gordon mentioned in 1987 that if Westin is unable to help anyone they are transferred over to Fairview) and A Nightmare on Elm Street 5: The Dream Child (in 1989 when Yvonne Miller has to visit it to locate Sister Mary Helena's corpse in order for her spirit to help Yvonne's high school friend Alice and her unborn son Jacob against Freddy within the dream world).

The hospital itself remains silent and empty again for years to come after the missing Sister Amanda's trapped spirit was set free from her earthly resting place, but that would sadly delay the ongoing dark return of Freddy Krueger to the town of Springwood. 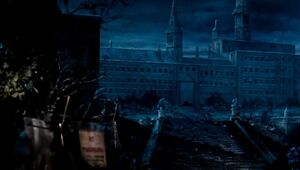