The Evil Wiki
Register
Don't have an account?
Sign In
Advertisement
in: Mature, Evil Realms, Hell-Dimensions,
and 14 more

Hell is a frequent location in the adult cartoon comedy series South Park. despite that universe's version of Satan being a somewhat tragic anti-hero rather than his usual monstrous depiction in other media, Hell itself is still depicted as a very violent, horrific world - ironically almost everyone in the South Park universe goes to Hell when they die, regardless of how "good" or "bad" they were in life (showing South Park to be a Crapsack World); only Mormons are sent to Heaven after their death changed due to the face, so basically everyone in history who was not a Mormon during their lives is currently living in this netherworld; including Hitler, Gandhi, JFK, Jeffrey Dahmer, Gene Siskel, and so on. However, this may have been changed, due to the fact that Kenny, a Roman Catholic, has gone to Heaven at least twice.

Hell in South Park is quite unlike the typical Christian Hell. Though Hell is the fiery, cave-like place where Satan was sent to languish for eternity after rebelling against God, neither the South Park Hell nor Satan seem to be all that bad. Satan is generally an easy-going, fun-loving guy. He rules Hell lazily, rarely taking any direct action (aside from throwing the occasional Christmas party or luau). People in Hell build homes, eat food (presumably of Hellish origin--one episode shows Satan catching fish from a lake of lava), and even seem to run businesses (such as the butcher who sells a "festive Christmas ham" to Jeffery Dahmer in the first Christmas special).

Death in Hell is meaningless, as anyone who dies in Hell is simply resurrected the next day (such as when Saddam Hussein and Chris killed each other over Satan's affections). This, in turn, results in the people and demons in Hell seemingly taking a different attitude towards pain and injury. Tiny black imps or other red devils are sometimes shown hurting or torturing humans, much to the carefree amusement of onlookers. Though most people in Hell are free to wander about and do whatever they like, there are a few people who are shown chained to walls. These people might be chained up simply on the whim of Satan or some other fallen angels, or it may be that they are being punished for some underworld infraction (irritating Satan, interfering with parties, etcetera). It is unlikely that they are being punished for something that they did in their lives on Earth, that sort of thing doesn't happen in the South Park Hell. It does not seem to matter who you were when you were alive; Hell treats you the same no matter what. People like Paul Bundy and Mother Theresa are often shown side-by-side, singing and drinking together at Satan's parties, and no famous criminal is ever shown with a specialized punishment for his or her sins.

There are several different types of demons seen there; most prominently small, black creatures with Canadian-esque heads that bounce around and squeal constantly, which Satan apparently used to take over the world in "South Park: Bigger, Longer & Uncut". In "Best Friends Forever", new types of demons are seen, who are notably more detailed and intimidating (like Satan himself in that episode). They are large, red, humanoid creatures carrying over sized axes and swords. It seems demons in hell have some sort of immunity to Earth weaponry, yet are vulnerable to electricity (as shown when Cartman killed a demon with a single powerful electric shock in "South Park: Bigger, Longer & Uncut"). The reasons for this, if there are any, are so far unknown. 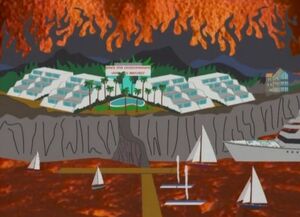 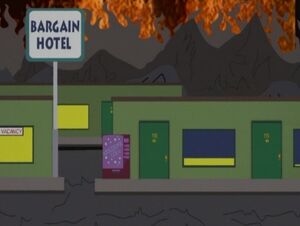