The Evil Wiki
Register
Don't have an account?
Sign In
Advertisement
in: Mature, Hell-Dimensions, Theological Villainy,
and 2 more

Hell (The Garden of Earthly Delights)

The Garden of Earthly Delights

To serve as a place of eternal punishment for those who have lived a life of excess or sin.

Hell is the subject of the third panel of the famous painting The Garden of Earthly Delights by 16th century Dutch/Netherlandish painter Hieronymus Bosch, and it is considered by many as one of the most vivid and powerful depictions of Hell in history and also has been debated on for centuries with some believing the work was inspired by Bosch being insane or high on drugs while others noted that the work suggests Bosch, in contrast to being insane, was in fact extremely sane and his work was meant as the ultimate warning against a life lived in pursuit of excess, sin and its inevitable descent into damnation.

In one scene a demon in the form of a pig dressed in the garb of a nun tries to tempt a sinner into signining a contract with the Devil, alongside a strange armored demon with the beak of a bird and the legs of a frog, its face hidden under a knight's helm and carrying a severed human foot, the pig-demon holds the quill while the bird-demon holds the ink; the sinner seems to be resisting the temptation but is also of knowledge that his soul may already be doomed, all around him the horrors of Hell play out, suggesting this is the first stage of Damnation.

A knight is devoured by a collection of wild animals (sometimes clarified as wolves) atop an elaborate stage, the knight carries a golden goblet, gambler's dice and a flag, all of which have been tossed aside as the monstrous creatures feed on his broken body, the gruesome scene is played next to the Punishment by Boiling and directly below the stage an impossibly large butcher's knife is place like a surreal bridge in the hellish landscape.

A group of sinners are sealed in a metal box and burned for all eternity, it is believed by some researchers that these souls are the ones who were responsible for the suffering and death of Jesus, thus they are given one of the most brutal possible punishments even within an already extremely violent and depraved world.

Ruling of the entire scene of terror is a bird-headed, eternally ravenous Prince of Hell who consumes sinners, then defecates them into a waiting cesspool for all eternity, he is seen to wear a large cauldron as a blasphemous crown and his feet are both hidden in smaller cauldrons.

Next to the cesspool, a drunkard is forced to vomit for eternity into the waters below, while being harassed by either a demon or other damned soul.

a vain woman lays by the feet of the Prince of Hell and is forced to gaze upon her own reflection for all eternity, the mirror being etched into a demon's rear, the woman is also accompanied by a strange rabbit like demon that clings to her and gazes into the same mirror, the woman has her eyes closed, apparently trying to block out the horrors around her.

A demonic hare stalks the realm, a mockery of hunters, carrying with it dead or captured humans, it is accompanied by a pack of demonic hounds, who are in the process of attacking a sinner.

A gambler is assaulted by a rat-like demon while his hand is impaled by a knife, the demon has his neck in one hand while it prepares to stab his torso with a sword in the other, the man doesn't resist, meanwhile other sinners are humiliated or tortured around him in similar ways.

In one of the most famous scenes of the work a grotesque frog-like demon with a long tongue filled with bulbous growths sits beneath the two large musical instruments being used to torture sinners, while to his side another soul is trapped in a drum and being tormented by a lesser demon, to his front is a sinner being crushed under the weight of one of the giant musical instruments, exposing only their naked rear, upon which demons have written a blasphemous hymn (see "Sinner's Hymn").

A slothful sinner is doomed to sleep for eternity while being visited by nocturnal demons in the form of toads and other shadowy figures, which harass and assault him in his sleep.

Three sinners are executed in gruesome ways by oversized musical instruments, one is crucified on a harp, another is trapped in an instrument while a blind man pulls on a wheel, eventually beheading them while the final is tied to the top of one instrument as a demon scales the instrument, ready to pull the sinner down, presumably either freeing them for further torture or mutilating them further .

Amidst the burning cities that make up the outskirts of Hell a demonic war-machine ploughs through the souls doomed to eternal conflict, the machine itself resembles large human ears and a knife, perhaps symbolic of those who are capable of listening but refuse out of spite or other sin.

In another famous scene stands the "Tree Man", who is believed by many to be a self-portrait of Bosch, his lower half is carved out to reveal a tavern within, where many sinners are engaged in illict deeds, atop the Tree Man a group of sinners and demons engage in a lustful dance in a circle around a gigantic bagpipe (an instrument associated in the time period with lust due to its apparent phallic shape).

As mentioned in the Musican Demon's section this work is famous for including a disturbing hidden musical piece, this "Sinner's Hymn" has become a source of fascination in itself to many people, who have gone to great lengths to try and recreate it in varied ways - the musical piece itself is noted to contain certain notes that were not allowed in most music of the time period due to the notes being considered too disturbing or "of the Devil". 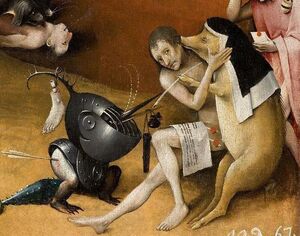 a sinner is tempted into signing a contract by a pig dressed as a nun, with another demon holding the ink. 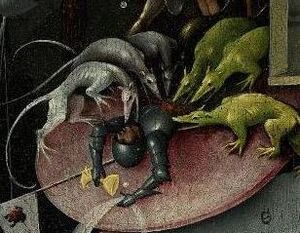 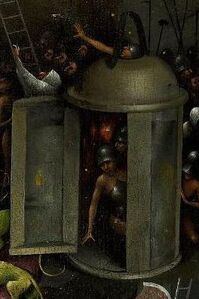 a group of sinners are sealed in a metal box and burned for all eternity. 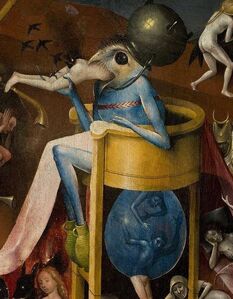 the ravenous Prince of Hell continually consumes sinners, then defecates them into a waiting cesspool for all eternity. 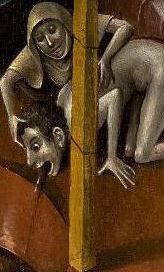 a drunkard is punished by being forced to continually vomit into the cesspool of lost souls. 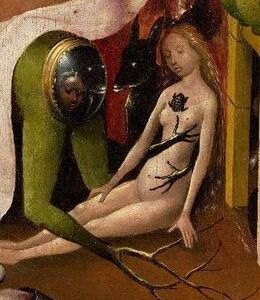 a vain woman is forced to gaze upon her own reflection for all eternity, the mirror being etched into a demon's rear. 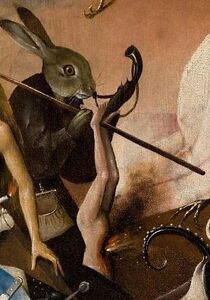 a demonic hare mocks hunters by pursuing humans and carrying his prize, accompanied by demonic hounds. 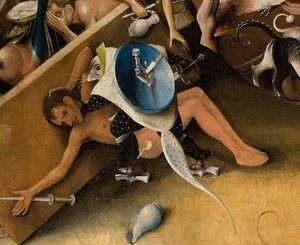 a gambler is punished via having his hand impaled as he is assaulted by a rat-like demon. 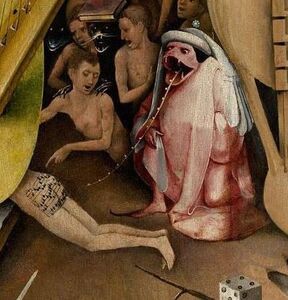 the musician demon oversees the torture of an unknown sinner, writing a blasphemous hymn on his rear.

a slothful sinner is doomed to sleep forever while nocturnal demons assault him. 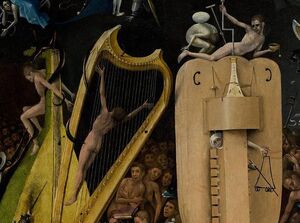 the fates of several sinners: one is crucified on a harp, another is trapped in an instrument while a blind man pulls on a wheel, eventually beheading them. 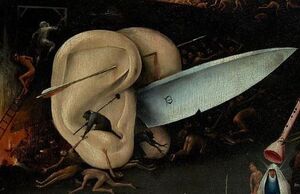 a demonic war-machine ploughs through the souls doomed to eternal conflict in the burning cities of Hell. 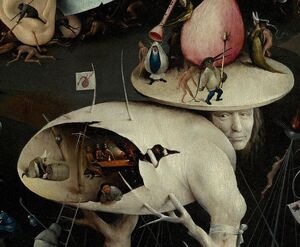 the "Tree Man", who is carved out to reveal a tavern within, full of sin and vice.
Community content is available under CC-BY-SA unless otherwise noted.
Advertisement