Hellfire is a spiritual flame believed to exist in Hell or other dystopian negative afterlives, the flame is said to burn into the very soul of those trapped in such a realm and it causes intense suffering beyond that experienced on Earth, a kind of never-ending torment by which the sins of one's past life burns into one's very soul like acid.

In medieval times, most theologies taught that Hellfire was permanent and without end however there are those who believe the state of Hellfire is more akin to Purgatory - where those who have committed crime are punished only temporarily, others (such as Universalists) do not believe such a thing exists at all as they see all beings as ultimately being accepted into Heaven. 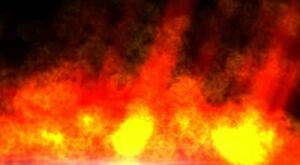 Hellfire
Add a photo to this gallery
Retrieved from "https://evil.fandom.com/wiki/Hellfire?oldid=48188"
Community content is available under CC-BY-SA unless otherwise noted.