All the local residents of Hinamizawa

To kill all of the local populace of the village Hinamizawa.

The Hinamizawa Syndrome is a psychiatric disease in the 2002 visual novel Higurashi no Naku Koro ni/Higurashi When They Cry. This infection is found in Hinamizawa and was researched by Hifumi Takano. His granddaughter Miyo Takano, used the disease to infect the villagers with it and made it look like those infected by the disease were cursed by Oyashiro-sama as part of her plan to destroy Hinamizawa and surpass god himself (in fact, of course, she herself was infected by the disease since she had been to Hinamizawa several times). The syndrome is famous for its ability to make people infected by it go insane, causing anxiety and paranoia which can cause those infected to commit strange and violent acts, including suicide. It has been seen in an immunization shot in Oniakushi-hen, Meakashi-hen, and Tsumihoroboshi-hen. The symptoms of this disease are an amalgamation of real symptoms, such as clawing out one's own throat, which is a real symptom called formication.

According to Matsuribayashi-hen, Dr. Takano had already discovered the existence of Hinamizawa Syndrome about 20 years prior to the story. He wrote a report regarding the town and its disease plaguing its residents and called it Hinamizawa Syndrome. His goal was to make the disease public, with an eye securing funds for its treatment and increasing the awareness of the general public. However, the higher officials didn't accept his report on the matter; to do so would mean accepting the blame of the Marco Polo Bridge Incident themselves. After Dr. Takano's death, his adopted granddaughter Miyo Takano decided to take over the research on Hinamizawa Syndrome, and received a great deal of funds from a mysterious woman named Nomura, representative of a underground organization called "Tokyo". It's implied through the some parts of the series that the disease may be related to some sort of parasitic organisms that live in the Hinamizawa residents.

Further Research in the Irie Institution

The research that takes place is based off of the collective data of the 2000 villagers and Dr. Takano's research in the military. Here they found that the Hinamizawa Syndrome's parasite abandons its host as soon as the host dies, leaving the researchers no way to identify the pathogen after the death of an infected person.

The syndrome has been shown to cause significant brain damage to the subject if they obtain L5 status. Hōjō Satoshi had an attack and achieved L5 status, but was hospitalized quickly afterwards. He was shown to be in a coma, or an induced coma for until his brain recovered enough with enough medication. Even after being treated for more than a year, Satoshi was in a state where if he woke up, he would continue to have delusions and hallucinations. Despite this, recovery is still possible if the treatment continues.

The first treatment was created in 1980, during the period of Satoko Hojo's hospitalization. Irie developed the medicine C-103 from an antibody in Rika's blood. The treatment was successful in reducing Satoko from L5 to a L3 status. However, she would have to continue to receive this medicine three times a day in injections, or else she would suffer a relapse.

During this same period of time Miyo Takano was developing H-170, a drug designed to induce the L5 symptoms onto an infected person. Its main reason for being developed was for use in the military, since "Tokyo" decided that Japan would need a threatening biological weapon to compete with other large countries (especially the ones with nuclear powers). Later, in 1983, it was used in the assassination of Tomitake Jirō during Takano's plan to abuse emergency manual #34.

Around 1982, the medicine C-117 was created. It was shown to be an effective treatment, making it so Satoko only had to take two shots per day, however Irie was not entirely satisfied with its effectiveness and continued to research for a treatment.

In 1983, C-120 was completed. This is the medicine that Rika uses against Shion in Meakashi-hen and against Rena in Tsumihoroboshi-hen, the Crazy Medicine. It supposedly has the power to reverse the effects of L5 down to around L2 or L3 with one injection. However, it shows an extremely negative effect on uninfected individuals (such as Rika). Those who are injected with this medicine who are L1 or L2 suffer muscle spasms, itching at the lymph nodes and extreme loss of stamina, since the medicine's purpose is to depress hormone levels.

On the Emergency Manual #34

The Furudes were identified as the supposed 'queen carriers' of the parasite, with the queen being the latest born female. Hifumi Takano theorized that as soon as 48 hours after the queen carrier dies, the parasites will go out of control, causing everyone in the village to obtain L5 status. This is the reason for creating the emergency manual #34, which gives detailed plans for the termination of the entire village if such a case occurs.

However, in Watanagashi-hen and Meakashi-hen, Furude Rika is dead for more than 48 hours with no effect. This means that the queen carrier theory is false, although at most the Furude family contains an antibody of this syndrome.

On the Coup d'Etat

Although the institution was scheduled to be disassembled around 1988, after the coup d'etat on the Irie Institution there was a major reorganization of the system. Irie continued to direct the above-ground clinic while a new director was chosen to accomplish research (although Irie continued his research on the cure), and the research was done passionately as opposed to the passive ways of the past. Takano, having been under the effects of L5, was to be treated and then handled by a disciplinary committee after becoming stable. The Irie Clinic was sold to a private party and handled as a regular clinic afterwards.

In his report, Dr. Takano stated that Hinamizawa Syndrome was untreatable and irreversible. He also stated that anyone who enters the village shall be infected by Hinamizawa Syndrome no matter what, although the activation of the syndrome will depend on the patient's mental condition. Despite this, it seems that tourists are able to come and leave the village freely without showing symptoms afterwards.

In Tsumihoroboshi-hen, Keiichi successfully rescued Rena, who was about to enter the end-stage of L5 in Hinamizawa Syndrome. It was revealed later that Rena was able to return from L5 back to L2 without the use of medication. Also, Irie Kyōsuke invented a proto-type of an immunization shot which later became the base of the completed C-120 shot. The C-120 shot was able to give immunization to anyone who enters the village and, to some extent, suppress symptoms in advanced stages of the disease.

Levels and Rankings in the Hinamizawa Syndrome

According to Dr. Takano's research in Matsuribayashi-hen, Hinamizawa Syndrome has five different stages, ranging from L1 (weakest) to L5 (strongest). A list of them is below.

Level One and Two

Weakest levels; almost all villagers and residents of Hinamizawa are infected, although they are at the lower stages of either L1 or L2. The syndrome does not cause apparent changes until its later stages. This indicates that the entire village is highly unstable and will easily grow hostile from any stress or anxiety, such as the dam project. Some more than others, like Keiichi, are susceptible to simple paranoia and stress, which has been shown to activate the syndrome.

Beginning at L3, the mental condition of the patient will start to deteriorate and they become mentally and emotionally unstable. According to Irie in Minagoroshi-hen, Satoko was already in the end-stage of L3 before starting treatment.

Paranoia and hallucinations start to appear surrounding the onset of L4, as in the case of Keiichi in the later half of Onikakushi-hen.

Strongest level; this is when people began to hear 'Oyashiro-sama's footsteps', and patients are known to start clawing at their own flesh. In some cases, there is a previous psychological motive that serves as a catalyst for the scratching. For example, Rena Ryuuguu hallucinated that her wrist and neck were infested by maggots because of a previous incident regarding her belief that her blood from her mother consisted of maggots. This is an example of extreme formication. Formication is when a person suffers from the sensation that insects are crawling under their skin and scratches intensively to either remove the imaginary parasite or to simply end the pain. It is a real symptom to certain sexually-transmitted diseases such as syphilis and herpes. Skin diseases can cause this form of extreme irritation to the skin. Formication occurs in real life due to excessive use of amphetamines, suggesting the police station's wondering of whether Keiichi used narcotics as a provocative of his suicide in the first arc. There are several mistakes on the characters' views on the formication properties of the syndrome. Kyosuke Irie claimed that drugs did not result in "clawing at the throat", although formication does occur when under the influence of narcotics. If according to Kyosuke Irie that formication under these circumstances are caused by microbes, Crazy Medicine (C-117 version), Irie's invention, would have to be either an antibiotic or a vaccine. It is revealed in Matsuribayashi-hen that C-117 was developed to be a trial-stage vaccine for anyone visiting Hinamizawa for fending off the airborne pathogen (like any other vaccine, it proved to be useless for those who already had the Syndrome, such as Takano Miyo who succumbed to L5 near the end of Matsuribayashi-hen, since she did visit Hinamizawa a few times before C-117 was developed).

In Higurashi no Naku Koro ni Kira's first episode "Batsukoishi-hen", Takano attempted to infect Keiichi with the Hinamizawa Syndrome only to be stopped and killed by Rena, Mion, Rika and Satoko after which they almost ended up killing Keiichi. Keiichi woke up from the dream only to realize that Kuraudo Oishi, Jirou Tomitake and Kyosuke Irie had infected him with the True Hinamizawa Syndrome in a parody of the original series.

Similarly, the second episode, Ayakashisenshi-hen, had a dense fog that had a similar effect on the villagers of Hinamizawa in a parallel world. This fog, like the disease in the main universe, also caused people to go insane, making them act violent and hostile towards those who remained unaffected by the fog. Just like the Hinamizawa Syndrome, this fog was also used by Miyo Takano to brainwash the villagers, who in said dimension was a general of Tokyo Magika. The fog was also produced by Takano herself. 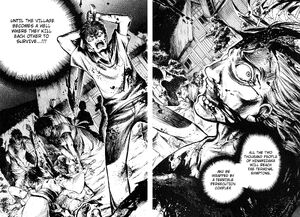 The Hinamizawa Syndrome as seen in the Higurashi When They Cry manga.
Add a photo to this gallery
Retrieved from "https://evil.fandom.com/wiki/Hinamizawa_Syndrome?oldid=117694"
Community content is available under CC-BY-SA unless otherwise noted.