Deadly Doom Slide: Way back during the park´s 10th Anniversary Year, attendance started to die off. People were bored with the same old rides all over again. But, then Bill Board, Head of the Horrorland Advertising came up with a plan to make the park frightening again. First, the horrors bought the ten haunted acres of cementery next to it and used the tombstones to build several things over the park leaving many ghosts homeless and unhappy. Then a contest came in to design the scariest slide ever. Instead of picking one the horrors picked 10 random designs and constructed the Doom Slide.

The slides in the Doom Slide are:

House of Mirrors: The House of Mirrors is a small building made out of glass. Once inside, a person will sooner or later get trapped inside a room of glass where the walls will close in and try to crush them, until a chute opens and they slide out. The official story is a horror supermodel thrashed the place, but it obviously was closed to avoid guests escaping to Panic Park.

Coffin Cruise: A person is put inside an open casket that floats down a river, until the casket slams shut and the person is left in the darkness. Near the end, spiders crawl over the person. The coffin cruise is said to be lethal. It crosses the Mind Swamp in which brains float in the water. It is between Black Lagoon Water Park and Vampire Village.

Werewolf Village: The Werewolf Village is one of many monster villages found throughout Horrorland. It is a real working neighborhood inhabited exclusively by werewolves; it was created because at the park start when monsters were all roommates, a werewolf´s roommate would disappear on every full moon. A forest spot (Wolfsbane Forest) was picked and added a few things. The main attractions are Make Me Howl! (a shop where they will transform you into a werewolf digitally), Moment of Paws (a werewolf-run spa, turns out werewolves are really good masseuses and hairdressers), Wolfgang´s Music Shop (a place where you can purchase werewolf howl recordings, moon-themed songs, and CDs of Howie and the Howlers, the most famous all-werewolf band ever), Fur Sure! (a clothing store where all the clothes are made of shed werewolf fur.), Over the Moon Souvenirs (a gift shop selling silver bullet keychains, wolf cub dolls, miniature Werewolf Village play sets, jars of authentic werewolf drool, and wolf´s tooth necklaces), and Wolf It Down (the only vegetarian werewolf restaurant with the house specialties being tofu one-armed shepherd pie, cub club cheese sandwiches, and little pigs lettuce in salad.) The most popular things here are The Werewolf Petting Zoo, where you can pet many kinds of werewolves, from snuggly grey little cubs to mean gigantic adult ones, and The Wolfsbane Forest a deep dark forest where giant bugs crawl in the trees. The Wolfsbane Forest is the feeding place for many werewolves and home to their distant, rare and dangerous cousin: the white wolf.

Horror Rapids: Not much is known about this ride, although it can be found near the House of Mirrors.

Roller Coaster: An out-of-order roller coaster found near the Bat Barn. Despite it being broken, people can still ride it, if they dare.

Free Fall: A large, green building which is "the only bungee jump without a cord".

Alligator Swimming Pond: The Pond is a small inlet of water which people can swim in, even though alligators live in it. It is waist-deep and warm.

Vampire Village: The Vampire Village can be found near the Monster Zoo. Here´s where most of the remaining vampires live. It is also inhabited by vultures and bats of all kind. The main building is the Vampire State Building a huge stairless. black and red, cape-wearing one, it houses the Plasma Plaza. To get to it you must follow the Yellow Guano Road. In here are many attractions such as Vulture Beach, Bat Barn, The Worm and Bait Shop and the Mind Swamp.

Monster Zoo: The Monster Zoo is viridian colored building which, according to Lizzy Morris, "horrible shrieks and howls can be heard from within".

Madame Doom: Madame Doom is actually a robotic wooden fortune telling dummy that resides inside a small purple booth. She is said to be possessed by the ghost of a russian fortuneteller.

Quicksand Beach: This is a beach that resides in the section of horrorland known as Black Lagoon Water Park and is made entirely out of quicksand. Horrorland visitors are given special quicksand (semi-)resistant shoes and are told to walk across the beach. They sink, no matter what, into tubes hidden underneath the beach that take them to another part of the park.

Play Pen: This is a mini arcade where you can play games like the Vampire Darts, Mirror Mirror, and The Trick or Treat Wheel.

The Happy Tooth Game: This is probably the most horrific and painful ride in HorrorLand. It involves a monster dentist's office, where the Horrors drill through human's teeth. There is blood on the spit sinks, and the Horrors threaten to drill through the lips of people who do not open their mouths. The only way to escape is to twist the nose of a dentist, who are all robots, which shuts them down.

The official public logo of the HorrorLand theme park. 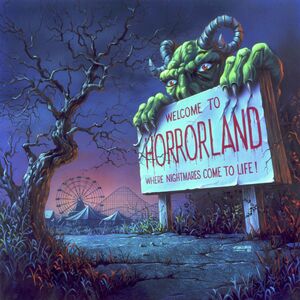 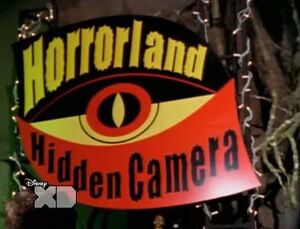 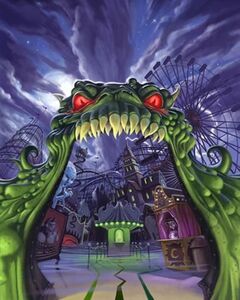 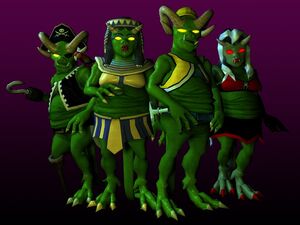 The Horrors
Add a photo to this gallery

Retrieved from "https://evil.fandom.com/wiki/HorrorLand?oldid=64131"
Community content is available under CC-BY-SA unless otherwise noted.