The Evil Wiki
Register
Don't have an account?
Sign In
Advertisement
in: Villainous Events, Magic, Oppression,
and 3 more

To begin the Red Queen's hostile takeover of Underland and her vendetta against the peaceful White Queen and her allies.

Horunvendush Day, also sometimes spelled "Horovendush Day" or "Horevendush Day", is the name of a sinister event in the Alice in Wonderland universe. It is the day of Iracebeth the Red Queen began her rise to power as she subjugated all of the magic world of Underland to her cruel reign.

The events of that dreadful day were shown in the Mad Hatter's flashbacks. Horovendoush Day occurred when Mirana the White Queen was attending a festival at the Hightopp Village alongside Tarrant Hightopp, when the evil monster known as the Jabberwocky, on "behalf" of her hateful sister Iracebeth, attacked the village. The White Queen managed to escape with her white horse, her soldiers and the Hatter, but lost the Crown of Underland which was taken immediately by the Red Queen, and the fabled Vorpal Sword, which was found and taken away by the Knave of Hearts. During the events of the Horovendoush day, the Hightopp Village was completely destroyed and the Mad Hatter was the only villager who survived.

Alice Through the Looking Glass

When Alice Kingsleigh used the Chronosphere to traverse the vast Ocean of Time, she than saw the frightening flashback of the Jabberwocky's attack on the Hightopp Village. She then entered that past timeline and witnessed the ongoing attack on the Hightopp Village during that same day. She also saw the Armored Cards taken away the Hightopp Clan, the Hatter's family, revealing they are alive. Alice also immediately the newly-crowned Iracebeth holding her broken tiara and exclaiming her successful hostile takeover of Underland by saying "Revenge is mine!" before taken off on the foot of her Jabbewocky pet. 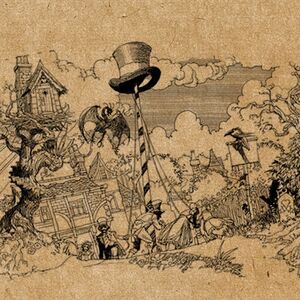 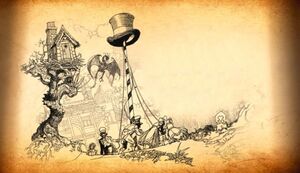 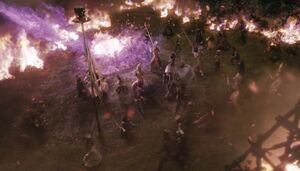 Horunvendush Day as seen in Tim Burton's Alice in Wonderland.