To regenerate or increase Horvath's power via the Parasite Spell used on his sorcerous victims.
To free all of his 4 evil fellow sorcerers including his mistress Morgana le Fay from The Grimhold.

Horvath's Staff (originally known as Horvath's Sword and also known as Horvath's Cane) is an ensorcelled cane belonged to the staunch evil Morganian sorcerer Maxim Horvath and it is one of the many magical items featured in the 2010 Disney movie The Sorcerer's Apprentice.

Originally, it was Maxim Horvath's magical sword, which at one point in the past, Horvath turned it into an ensorcelled cane-like stave using his magic in order to suit it with the modern world, and presumably, to avoid unwanted attention. Horvath uses his staff for all of his magical skills in the same manner with how sorcerers in other fiction uses their staves/wands, including while fighting Balthazar, his former best friend.

Originally, it was a long, medieval sword with the blue crystal on its pommel that glows whenever Horvath use his magic. After Horvath changed its form to suit the modern day era, it became a long and black cane, which retains both its blue crystal and the crystal's glow every time Horvath uses his magic.

It later has Abigail Williams' pendant, Merlin's Dragon Ring, and Drake Stone's ring attached to it.

Horvath's Staff enables him to use his magic in the same or similar manner with sorcerers who uses their rings. Before being modified, its powers were in standard magical level, presumably in same level with the Ring of his old best friend and once-fellow Merlinean, Balthzar. Horvath later amplifies its magic by attaching Merlin's Dragon Ring (by stealing it from Dave Stutler), Drake Stone's Ring, and Abigail Williams' Necklace on it. In process, the staff became very powerful, and ultimately, amplifies Horvath's own magical skills.

However, like magicians in fantasy works whom uses magic via wands/staves, Horvath's staff was the only known means to use his magic. If he is separated from his staff, Horvath became a vulnearable target until he retrieves his staff. This was shown when Dave uses his machines that blasts Horvath's cane away, disarming him and allowed Balthazar to blast him.

Maxim Horvath's Staff is featured in the 2010 Nintendo DS videogame adaptation of Disney's The Sorcerer's Apprentice with Horvath himself as the game's fifth boss.

Due to the game's graphic limitations, the staff is less ornate in design, comprised of a long rod with white crystal head. Also, rather than placing stolen catalysts on it, Horvath wears the rings on his main hand as shown in the ending of the game's final cutscene (includes Abigail's necklace and Sun Lok's Dragon Belt which has been transmogrified into ring forms). 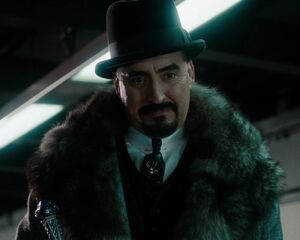 Maxim Horvath with his magic Sword in his early days when he uses it to betray Merlin. 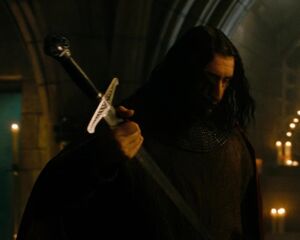 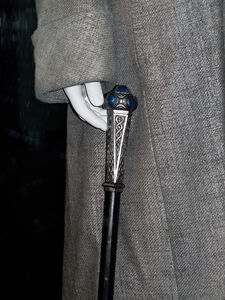 Maxim Horvath utilizes the magic of his Staff.

Horvath uses his magic Staff to open the Grimhold and free Abigail Williams. 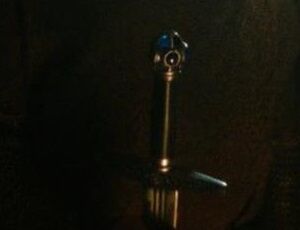 Horvath utilizes the magic of his Staff.
Add a photo to this gallery
Retrieved from "https://evil.fandom.com/wiki/Horvath%27s_Staff?oldid=113554"
Community content is available under CC-BY-SA unless otherwise noted.