The Evil Wiki
Register
Don't have an account?
Sign In
Advertisement
in: Mature, Rituals, Villainous Events,
and 5 more

Human Sacrifice is a ritualistic killing of one or more human beings so as to appease a deity, a demon or other preternatural force - often it is considered a barbaric act but depending on the time period or culture it could be a common occurrence (as was the case with Aztec civilization) or worshiped by billions as a righteous or spiritual event (such as Jesus Christ on the cross which was referred to as "The Crucifixion").

It is also used in some forms of Black Magic to obtain power from the death and/or suffering of victims - often this is done with ceremonial daggers, pyres or other ancient execution methods and a victim is usually picked for specific reasons (such as being a virgin).

As with some tropes, the concept of human sacrifice has long existed before TV Tropes itself was founded, being part of ancient cultures of man since immemorial. Some were supported by archaeological findings while others from accusations by the enemies of the people involved, sometimes exaggerated to the point of being questionable at best.

Regardless, the notoriety of real-life human sacrifice saw it popularized by modern media, serving as plot point of stories they featured in. Depending on story in question, human sacrifice can be part of Pact with the Devil-esque scenario, the culture of a society which either villainous or morally ambiguous at best, or the driving force for heroes to save the intended sacrifices from his/her doom (the sacrifice in question ranges from a damsel in distress or a vital villain who provide important assets for the heroes to stop an antagonistic force).

The following are methods of human sacrifice. Some of them are derives from historical accounts, while others proved fictional (either made up by the story's author or adapted from pre-existing questionable accounts in real life). 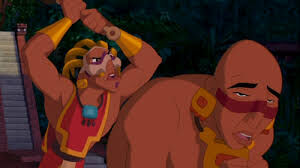 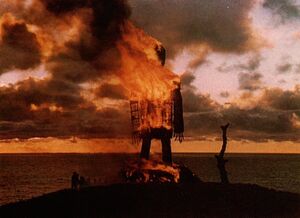 The Wicker Man monument of sacrifice used as a pyre of sorts in ancient times. 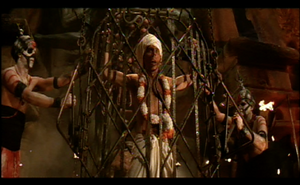 The nameless sacrifice victim is being lowered to the lava by the Thuggee cult led by Mola Ram. 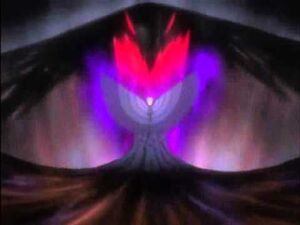 Mytho (corrupted by the Raven's blood) attempts to have a maiden sacrifice her beautiful heart to feed it to the Raven.
Community content is available under CC-BY-SA unless otherwise noted.
Advertisement