The Hypno-goggles are screen lens goggles that Evelyn Deavor uses to place people under her control when they are placed over their eyes, as her hypnotic screens can only work when eyes are on them at all times. She mostly uses them to control her Screenslaver puppet and Supers, to do her bidding and to make themselves look bad. The light pattern that hypnotizes people is what makes the lenses glow.

Elastigirl discovered the goggles, when she got suspicious about the Screenslaver she caught, remembered how his powers work and had noticed the mini screen lenses on the goggles she had pulled off of him. As she realized that she had faced the Screenslaver's puppet, the true Screenslaver and mastermind behind it all, placed them over her eyes before she could do anything to stop her.

Evelyn later got the supers under her control to capture and place goggles on Frozone and the younger members of the Parrs, while she and the mind-controlled Elastigirl dealt with Mr. Incredible; before moving onto the final stage of her plan.

Violet, Dash, and Jack-Jack Parr escaping the controlled supers, however, allowed them to take it upon themselves to save their parents and Frozone on the ship, where Evelyn plans to have her minions crash into New Urbrem in order to complete her goal.

After they freed their parents, they worked together to free the other supers from the goggle's control, which allowed them to foil Evelyn's plan and save the day.

Victims mind controlled by the Hypnogoggles 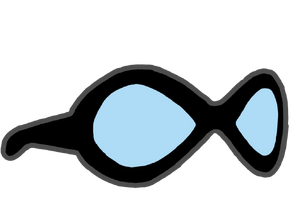 The Hypno-goggles
Add a photo to this gallery
Retrieved from "https://evil.fandom.com/wiki/Hypno-goggles?oldid=97577"
Community content is available under CC-BY-SA unless otherwise noted.