The Ice King's Crown is a golden crown belonged to the Ice King himself and it is the source of his ice magic. The Crown is composed of pure gold, topped with 3 points and adorned with three red ruby gems. One of the gems on the crown possesses a magical power that protects the Ice King from the evil brainwashing spells of the Lich.

In "Holly Jolly Secrets Part Two" it is revealed that long before the setting of the story, possibly before the Mushroom War, the Ice King purchased the crown in Northern Scandinavia from an "old dockworker" when he was still a human named Simon Petrikov, as a part of his studies to be an antiquarian of ancient artifacts. He rushed home to his fiancée Betty and put it on to try and make her laugh. Upon wearing it, Simon experiences visions, which he frantically fought with and shouted at. He also underwent a personality change that he apparently could not remember afterward. He realized the crown was doing these things to him and took it off quickly, only to find his fiancée terrified and looking at him with "such contempt". She soon left him. After repeated exposure, the proto-Ice King developed his Wizard Eyes and his body underwent radical changes with subsequent use of the crown. His skin turned blue, his nose grew long and pointed, his body temperature dropped, his hair and beard grew long and white. After so much exposure to the crown he gained power of snow and ice, causing his hometown to freeze solid around him unintentionally (which may have been how he created the Ice Kingdom). Simon realized that the crown's effects were becoming permanent, but knew he was "too far gone" to do anything. After the first time he put on the crown he started a series of videos chronicling what had become of him, in hopes that one day someone would help him to free himself from the things the crown was doing to his mind. The crown causes Ice King's emotional confusion and madness, as compared to Simon's calmness and intelligence. Simon's desire to make Betty (his "Princess") love him again surfaces in Ice King's desire to marry a princess and make her his queen.

In "What Have You Done?", the Ice King mentions that he did not steal the crown, although he did make it with stolen magic. It is proved that this is untrue, as stated in the Christmas special. Adam Muto commented Ice King is an unreliable narrator and disassociated from the past of Simon Petrikov. So he may not remember where he got the crown and simply made up the fact that he made it himself. Another possibility is that due to long contact with the crown has caused some of its memories to rub off on him; being totally amnesiac, he may have assumed it was one of his own memories. In the episode "The Lich", Ice King has one of the gems used to unlock the Enchiridion's true power. It is not known if this gem is also the source of the crown's other abilities or it's ability to keep the Ice King alive in "I Remember You".

In the episode "Finn the Human", Farmworld Finn puts on the crown, causing him to go insane and have a desire to freeze everything he can, all under the crown's sentient influence. It also causes his hair to grow rapidly, as it did to Ice King, and his hair is used to fly by flapping like wings, similar to the Ice King's beard. It is shown in this episode that the crown is fully sentient, as it becomes grieved by Simon's death and retaliates by freezing the planet for 400 years.

But there is one error, for when Finn and Jake beat Ice King's "invincible" armor in "Thank You", Jake puts on the crown, but nothing happens to him, whereas Ice King and Farmworld Finn had major effects. However, this may be because in Farmworld the crown's owner was already dead, while in the regular timeline, it is already bound to a live Ice King, or because Jake is a magic dog, and therefore probably would not be affected by the crown's magic, or because he is never human. 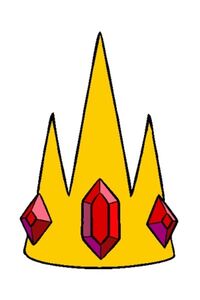 The Ice King's Crown
Add a photo to this gallery
Retrieved from "https://evil.fandom.com/wiki/Ice_King%27s_Crown?oldid=48324"
Community content is available under CC-BY-SA unless otherwise noted.