This typical royal-looking gold tiara is similar to the Ice King's Crown, only smaller. The most notable difference is that it has 5 points rather than only 4.

Just like her male counterpart's Crown, her powers are contained in her Tiara. It could give anyone the power over the element of ice, as shown when Cake put it on and blasted the Ice Queen with a snow blast.

It may or may not cause insanity when worn, based on the Ice King's origin story, though Fionna told Cake not to wear it because she "might catch her crazy." This indicates that the Ice King knows that the tiara like his crown causes insanity.

Other people can use its magical freezing powers such as snow blasts while wearing it. But anyone who would it, good or otherwise, would corrupt their minds and cause them to go mad and do harm. It is why the tiara itself is considered dangerous. 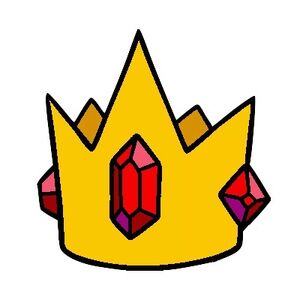 The Ice Queen's Tiara
Add a photo to this gallery

Retrieved from "https://evil.fandom.com/wiki/Ice_Queen%27s_Tiara?oldid=113887"
Community content is available under CC-BY-SA unless otherwise noted.