To keep Jafar bound by the law of genie magic and trapped in his Lamp unless a third wish is granted to set him free.

Jafar's Lamp is a magical, black, brass oil lamp that belonged to the evil sorcerer Jafar after he wished to a become a powerful genie and it later became the prison of both Jafar and Iago (formerly).

Jafar's Lamp is identical to Genie's Lamp, the only difference is, it has a pitch black coloring and an upside down handle. And it has markings on it's opening lid that resembles flames, a trait shared by the walls of Jafar's Chamber.

At the end of the film Aladdin, Aladdin tricked Jafar into wishing he was an all powerful genie. Aladdin knowing he will be sealed into a lamp for eternity to do a master's bidding, holds Jafar's black would-be prison that appears once the wish is granted by Genie and it sucks Jafar (while pulling Iago) inside. Genie then sent the lamp far into the Cave of Wonders for 10,000 years.

The Return of Jafar

In The Return of Jafar, Iago managed to escape the lamp, but instead of releasing Jafar from it, he threw it down a nearby well, due to Iago having grown irritated that Jafar does not grant him credit when it is due, and instead used him (with Jafar also making the grave mistake of reminding Iago shouting "Polly Want a Cracker" that finalized Iago's decision).

Later, Abis Mal finds the lamp at the well and rubbed it, releasing Jafar. At the end of the film, Aladdin and his friends tried to capture Jafar's lamp so they could destroy it, which would thus destroy Jafar. In the end, a wounded Iago, having fully turned against Jafar, kicked the lamp into a lava pit and it melted away, causing Jafar to electrocute, then explode into nothingness, destroying him forever.

Another black lamp exactly look-like Jafar's own Lamp is seen in the episode "When Chaos Comes Calling of the Aladdin TV series as the Evil Genie's own lamp.

Jafar was pulled into a lamp once again by Mickey Mouse at the end of Mickey's House of Villains, except this lamp looked like the gold one that belonged to Genie. 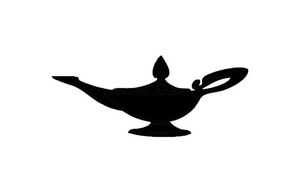 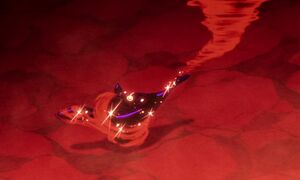 Jafar's Lamp appears at his "Palace" after the evil sorcerer wished himself to be a genie. 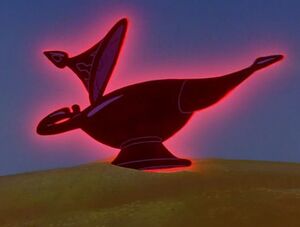 "DO AS I SAY, YOU WORTHLESS PIPSQUEAK!!" 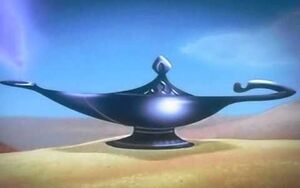 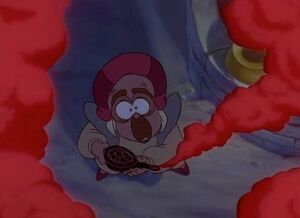 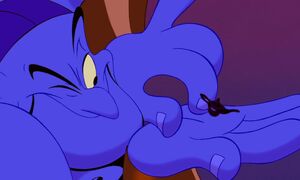 Genie about to flick Jafar's Lamp far into the distance. 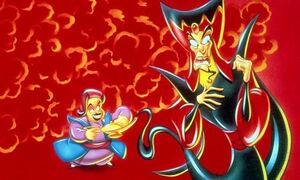 An artwork of the evil Jafar with the greedy Abis Mal holding his magic Lamp (miscolored as yellowish-gold). 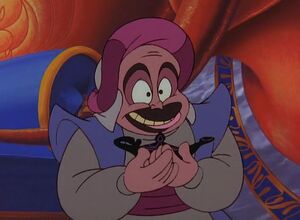 The insanely-greedy Abis Mal holding Jafar's Lamp while Jafar summons loads of treasures in exchange of him setting him free. 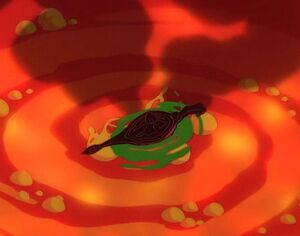 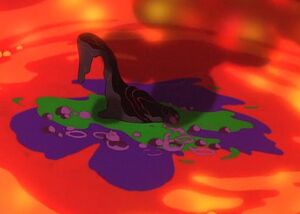 Genie Jafar screams in agony as his magic Lamp completely melts in the lava. 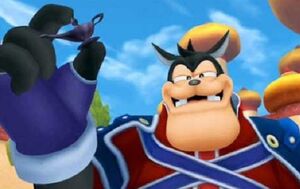 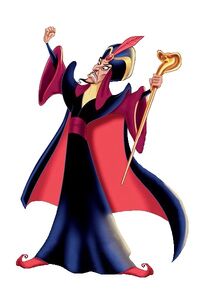 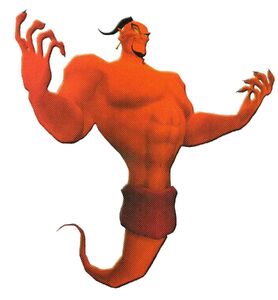 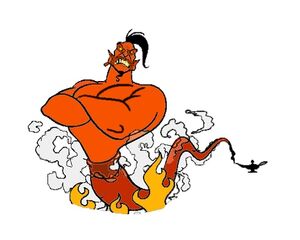 Genie Jafar and his Lamp.
Add a photo to this gallery

Retrieved from "https://evil.fandom.com/wiki/Jafar%27s_Lamp?oldid=95513"
Community content is available under CC-BY-SA unless otherwise noted.