Trap people inside it as well as to magically bring jungle-like African perils to life upon playing.

Jumanji is a cursed African game with supernatural powers and the titular object of the book of the same name and the main antagonistic object in the 1995 film adaptation of the same name, animated series of the same name, the 2017 movie and the 2019 sequel to the film. Even though many calamities ensue during the films and the animated series, it must be noticed that the source of all of this evil is none other than the game itself due to its curse of bringing harm to its players.

In the 1995 film and the animated series, Jumanji appears as a board game that brings the jungle-like dangers and traps into the real world for whoever plays the game. In the film's sequel Welcome to the Jungle, Jumanji transforms itself into a video game that traps up to five individuals who play it into its virtual world and has them face dangers under the identities of Jumanji's protagonists.

The game's origins are unclear yet in 1869, in Brantford, New Hampshire, Benjamin and Caleb Sproul discovered Jumanji, survived to win the game but were frightened of its power and set out to bury the box in the woods. When one boy asks, "What if someone digs it up?" the other says, "May God have mercy on his soul". After some time, the game is found 100 years later in the year 1969 by a young boy named Alan Parrish and his friend Sarah Whittle. They both start playing the game, until the game starts to show its dangers by incorporating bats in the house's fireplace that chase Sarah down the street, while Alan is sucked into the game until another player gets a 5 or 8 in the dices. 26 years later in 1995, two other kids, Judy and Peter Shepherd, move into the house Alan lived before with their Aunt Nora after their parents died in a skiing accident in Canada and find the game, unleashing more and more dangers as they progress, but also releasing Alan when Peter rolls the dice and gets a 5 after Judy informs Peter that everything will only be reversed if the game is finished. They find Sarah and get her to play the game, and after escaping a stampede, a vicious hunter known as Van Pelt, carnivorous plants, a crocodile and venomous spiders, Alan manages to win the game and send everything back, including time itself, allowing him to hide the game once again. Alan and Sarah throw the Jumanji game tied up with heavy bricks into a river, where it sinks below and out of sight before Alan and Sarah begin a romantic relationship and alter the future.

However, it was later seen washed up on a beach, half buried in the sand where two French-Canadian people heard the sound of the game's drums and began to approach it.

In the Jumanji cartoon series, the game's role is more prominent. The game is not just an object, but a sentient being, capable of getting angry and receiving information. The game also doesn't send the dangers to the real world, but transports the players into it's interior universe, meaning that if one doesn't solve the riddle the game proposes, the player will be trapped inside the game forever which is why it also said in the rules: "Jumanji gives a clue to help players complete their turn". Inside the deepest parts of the jungle, one will find a new meaning to "game mechanics", as a giant set of gears and machinery will be in the game's outer reaches, keeping everything under control.

Jumanji: Welcome to the Jungle

After washing up on a beach, Jumanji would transform itself into a videogame cartridge when it was ultimately found by a man named Vreeke and given to his son Alex in 1996. The game changed its medium due to Alex's apathy towards playing a board game and his interest in videogames.

As a video game, Jumanji gives players the option of selecting one of five protagonists, explorer Dr. Smolder Bravestone, zoologist Moose Finbar, genius Professor Shelly Oberon, commando Ruby Roundhouse, and pilot Seaplane McDonough, each of whom has a different skillset. The players are then forcibly brought into its virtual world as the character they selected and in order to leave, must beat the game. Only up to five individuals may be transported into the game at once, as a protagonist cannot be selected by more than one player.

The objective of the new Jumanji is to return the Jaguar's Eye jewel to its statue after it is given to the players by the ally NPC Nigel. Opposing them is a re-created Van Pelt, who is now depicted as a corrupt explorer seeking to claim the Jaguar's Eye for himself. Van Pelt is able to control the wildlife in Jumanji to hunt down the protagonists and also has an army of henchmen at his disposal. Players are given three lives and if all are used up, presumably die for good.

Alex became the video game's first victim after he selected Seaplane McDonough as his character. Twenty years later, high school students Spencer Gilpin, Anthony "Fridge" Johnson, Bethany Walker, and Martha Kaply found the game during detention and were sucked in as Dr. Smolder Bravestone, Moose Finbar, Professor Shelly Oberon, and Ruby Roundhouse, respectively. Managing to make their way through the game's levels, the four eventually found Alex, who was unable to get past Jumanji's flying section and was down to his last life. Working together and using their unique abilities, the players were able to overcome the game's challenges and despite all being reduced to their final lives, returned the Jaguar's Eye to its statue to beat Jumanji.

Upon completing the game, the four students returned to their school, while Alex went back to when he started playing Jumanji in 1996. The next day at school, however, Spencer, Fridge, Bethany, and Martha heard the sound of the game's drums. In response, the four destroyed Jumanji with a bowling ball.

Jumanji: The Next Level

Unbeknownst to his friends, the Jumanji cartridge was repaired by Spencer, who longed to become Dr. Smolder Bravestone again. Presumably as a result of the damage it sustained, the levels and objective of Jumanji changed, as did the playable characters and most of the NPCs.

The objective of this version of Jumanji is to retrieve the Falcon's Heart necklace from the villainous warlord Jurgen the Brutal and bring it before sunlight. Along with Dr. Smolder Bravestone, Moose Finbar, Professor Shelly Oberon, Ruby Roundhouse, and Seaplane McDonough, two new protagonists were added to Jumanji: thief Ming Fleetfoot and flying horse Cyclone. Like before, players are given three lives and presumably die for good if all are used up. The amount of individuals transported into the game is also limited to the amount of playable characters. Unlike the previous version of the game, however, the players are not able to select which character they control and are instead transformed into a seemingly random protagonist after they are sucked in. The only known way for the players to change their protagonist is to enter green-glowing water and make physical contact with the player they wish to switch avatars with.

The animated series features many dangerous characters, most of whom appear only once. The recurring characters include: 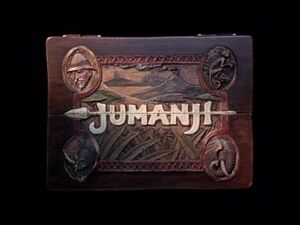 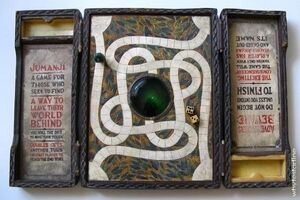 The inside of the Jumanji boardgame. 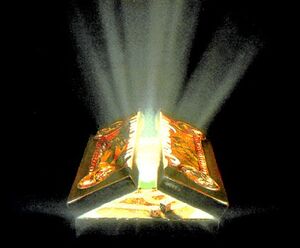 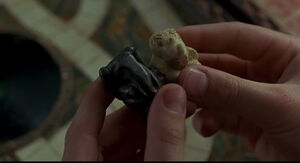 The Rhino and the Elephant tokens. 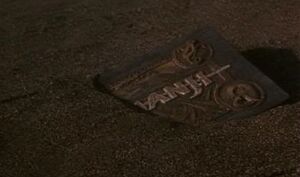 Jumanji buried under the sand after Alan and Sarah disposed of it twenty six years ago. 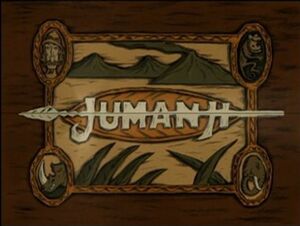 The Jumanji board game in the animated series of the same name. 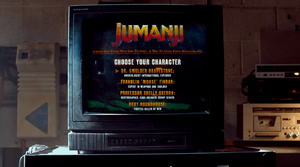 The screen which shows up before playing the Jumanji video game.
Add a photo to this gallery
Retrieved from "https://evil.fandom.com/wiki/Jumanji?oldid=101882"
Community content is available under CC-BY-SA unless otherwise noted.