Xehanort's Heartless (referred to himself as both "Ansem" and the "Seeker of Darkness), Riku (possessed), Sora

To unleash darkness within the hearts of individuals, to extract Kairi's Heart and use the power of the Seven Princesses of Heart to open the Final Keyhole on behalf of Xehanort.

"Keyblades of Heart" are one of the 3 types of Keyblades, alongside the 2 kinds of "Keyblades of Worlds' Hearts" — "Keyblades of Darkness", which only King Mickey uses, and "Keyblades of light", which the other Keyblade wielders use. Unlike the other two types of Keyblade, this type of Keyblade did not exist until the Realms were altered by the Keyblade War. As part of this development, it was no longer possible to open the door to Kingdom Hearts without using a Keyblade of Heart, which could only be completed by gathering seven hearts of pure light.

The Keyblade of heart has a simple design of red and black, akin to the Kingdom Key, with its teeth forming the outline of a heart. It has a rather dark design, despite being created from hearts of pure light. As it lacks Kairi's heart, this Keyblade is incomplete, and has never been seen at full power. It also lacks a Keychain that each Keyblade possessed.

After Sora retrieves his Keyblade from Riku and manages to defeat him at the Hollow Bastion's Main Hall, Riku stumbles around the lost castle, and eventually runs into the false Ansem at the castle's Chapel who convinces Riku to give Ansem his body. At the same time, the sinister fairy witch Maleficent has used the mystical energy of the seven captured Princesses to open the Final Keyhole, but without Kairi's heart, it is incomplete. With Ansem in control, Riku summons the Keyblade of heart, created from the 6 available hearts of the Princesses. Without Kairi's heart, the blade is also incomplete, and could release the stolen hearts if actually used.

The friends then track Riku down to the Great Hall, where Riku has used the incomplete Keyblade to summon the Keyhole of the Hollow Bastion. He reveals that Kairi's lost heart has been within Sora all along, and that it must be released in order to complete the Keyhole. He moves to release the young girl's heart by using the Keyblade on Sora, but Sora parries at the last second, and eventually defeats his best friend which freed him from the evil man's control.

Despite this, Kairi herself is still catatonic, and Sora is unable to seal the incomplete Keyhole. In order to save Kairi, the boy turns Riku's Keyblade on himself. This releases his, Ventus's and Kairi's hearts from Sora's body, reviving Kairi, but also completes the Keyhole and casts Sora into the darkness. Unbeknown to anyone, this act also produces Sora and Kairi's unique Nobodies, Roxas and Naminé. Secret Ansem Report 10 The Keyblade itself dissolves, releasing the Princesses' stolen hearts. Sora fades into a Shadow just as Kairi awakens, and the Heartless rapidly emerging from the Keyhole and forces Kairi, Donald, and Goofy to flee while Riku, freed from the Seeker of Darkness' control, holds them off.

The Keyblade of Heart appears within Roxas's dreams as one of Sora's memories. 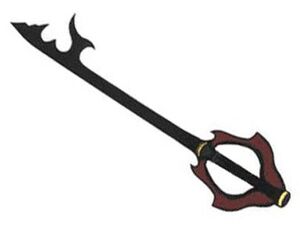 The Keyblade of Hearts
Add a photo to this gallery
Retrieved from "https://evil.fandom.com/wiki/Keyblade_of_Heart?oldid=47858"
Community content is available under CC-BY-SA unless otherwise noted.