The Kingdom of Aragon, also called "Aragon's Kingdom", is an ancient, medieval kingdom found within the Ghostzone and it is where the Amulets of Aragon originated from.

This land was ruled by Prince Aragon and his sister Princess Dorathea. Aragon's kingdom was stuck in medieval time until the end when Prince Aragon is defeated by Dora. 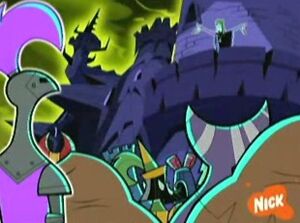 Aragon's Kingdom, also known as the Kingdom of Aragon, under the rule of Prince Aragon himself.
Add a photo to this gallery
Retrieved from "https://evil.fandom.com/wiki/Kingdom_of_Aragon?oldid=48037"
Community content is available under CC-BY-SA unless otherwise noted.