Sought by Lord Business as the key to his evil plans, the Kragle is a tube of glue designed to ensure that everyone touched by it is permanently sealed in place. It appears as Business' key weapon in The Lego Movie and ultimately is revealed to have some interesting truths behind it.

About 8 and a half years prior to the events of the movie, the Kragle was guarded by Vitruvius in order to hide it from Lord Business. Unfortunately, Business discovered and took the Kragle by force. Vitruvius described a prophecy in which a "Special One" would defeat Business and stop the Kragle from being used. Dismissing this as "hippy-dippy" nonsense, Business took the Kragle and spent the next few years preparing for his ultimate plan.

President Business of Octan Corporation who is actually Lord Business himself, reveals the Kragle following Emmet's escape from Bad Cop as it is connected to the dispenser, known as "The Kragelizer", and readied for use on the inhabitants of the Lego universe. As a test of Bad Cop's loyalty (and the subsequent removal of Good Cop), the Kragle is first used on Bad Cop's parents, freezing them in place. It is then readied for when Business intends to unleash it in full, a plan he initiates after his forces eventually capture Emmet and his allies.

Prior to their capture, it was said that the "Piece of Resistance" glued to Emmet's back would stop the Kragle (and cause it to explode in the process, presumably by blocking it) when it was connected. Business throws the Piece into the abyss outside his tower and Emmet soon follows shortly after attempting a heroic sacrifice by dragging the battery powering the weapons up to kill the other Master Builders. On the other side of the abyss, Emmet discovers the real world wherein a young boy named Finn and his father who is called The Man Upstairs are in conflict over Finn playing with his father's perfectly arranged Legos. It is here that Emmet discovers that the Kragle is a tube of Krazy Glue brand superglue, like those used by the father to lock his Legos into place, with a worn out label and that the "Piece of Resistance" is the cap. Soon, Finn helps Emmet back into the Lego verse after reconciling with his father.

On Taco Tuesday, Business unleashes the Kragle and proceeds to freeze a good chunk of the populace until they fight back. Eventually, Emmet breaks into his stronghold and Business, armed with the Kragle, freezes Emmet to the floor and intends to glue the rest of him. However, in a moment paralleling Finn's conversation with his father, Emmet talks Business down and Business attaches the Piece of Resistance to the Kragle, sealing it up forever. (And it does explode, although the characters are unharmed.) 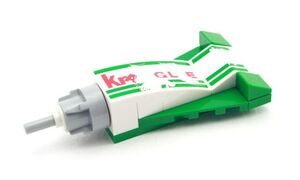 The Lego version of the Kragle.

Retrieved from "https://evil.fandom.com/wiki/Kragle?oldid=106328"
Community content is available under CC-BY-SA unless otherwise noted.