Start a Wiki
The Lævateinn is a cursed, ancient sword rumored to be "cloaked in eternal darkness" and it made its appearance in the exclusive-anime Kuroshitsuji II. Hannah Anafeloz harbors the sword within her own body.

The Lævateinn takes on the appearance of a bladed weapon. The primary color it bear is teal-blue; additionally, the sword possesses a marginal yellow, which borders its edges.

The sword's general form is aberrant to that of a regular sword, for stemming from its hilt, the blade branches off and outwards, its supplementary parts winding around one another until they reach the vertex.

The Lævateinn is a demon blade that can inflict fatal wounds incapable of being healed upon a demon. The soul pierced by the sword will come to a complete end. It is fundamentally used when demons engage in a battle to the death, and its purpose is to deliver the final blow. During an incident on the Island of Death, it is removed from Hannah Anafeloz's body, and subsequently cast aside while the land surrounding the island collapses into the fissures.

The Lævateinn can be extracted from its vessel, Hannah Anafeloz, through oral procedures. An individual must plunge his hand through her mouth, grip the hilt, and draw toward oneself the sword. When freshly separated with the body, it would be covered in saliva, which often induces disgust from the speculators observing the extraction. 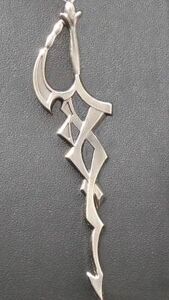 Retrieved from "https://evil.fandom.com/wiki/L%C3%A6vateinn?oldid=47452"
Community content is available under CC-BY-SA unless otherwise noted.