The Evil Wiki
Register
Don't have an account?
Sign In
Advertisement
in: Mature, Evil Realms, Torture,
and 12 more

The Lake of Fire

Burning lake of fire and brimstone

Punish and torment all evils forever.

The Lake of Fire is a hellish, fiery lake of burning lava that is a symbolism of absolute destruction found in ancient Egyptian and Christian belief systems, and it is often confused with Hell but is actually a different concept: Hell itself will be cast into the Lake of Fire alongside all its demons and sinners, according to the original prophecy of the Bible.

Unlike Hell, the Lake of Fire is considered God's absolute final punishment and will effectively destroy all evil from the mortal world, allowing the Kingdom of Heaven to rule forever.

This has caused controversy among some who believe that an act of absolute destruction goes against God's supposed "all-benevolent" nature and thus the concept of the Lake of Fire is sometimes dismissed as a medieval concept or a tool used by religion to scaremonger people in "acceptable" behavior.

The controversy has also opened new sects and new notions such as universalism (which dismisses both Hell and the Lake of Fire, believing God shall spare ALL beings) or its polar opposite, Maltheism (which depicts God as malevolent, a view considered heretical by orthodox faith).

Alternatively the Lake of Fire is viewed as the complete destruction of the soul, rather than endless punishment - this is a view taken by most modern theologians and preachers (save the infamous "Hellfire" preachers, who focus much greater on Damnation).

Sometimes, there are people of status with Complete Monster from fiction and Absolute Evil and with Damned souls to face here. 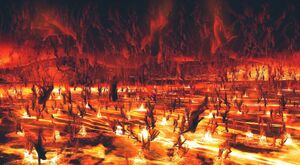 The Lake of Fire.