To summon the Cenobites.

The Lament Configuration, also known as the Puzzle Box and "The Box", and alternatively known as a "Lemarchand's box" and "Lemarchand's Configuration", is a magnificent magical puzzle box with intricate designs appearing in the Hellraiser horror movie franchise as the key plot element. Supposedly built to bring enchantment and endless sensual pleasure to all who possess it, it is, in truth, a cursed item from the Hellraiser series of books and films. In all incarnations the Lament Configuration acts as an interdimensional gateway for the demons known as the Cenobites and their leader, Pinhead, to enter the human world in order to torture whoever had opened it. Subsequently, the puzzle box also acts as a prison of sorts for the unfortunate recipients of the cursed Item.

The concept of the Lemarchand's box was envisioned by famed writter Clive Barker for his novella and movie adaptaion, while the movie version's visual esthetics were designed by Simon Sayce, one of the movie's lead creative instructors.

Within the Hellraiser universe, the Lament Configuration is the creation of the brilliant French toymaker Philip Lemarchand, and is referred to at times as "Lemarchand's box" in his honor. After finishing his magnum opus, Lemarchand, through unspecified means, had imbued the box with magical properties, the source of which varies between adaptations. As for Lemarchand himself, his background, physical description and history differ greatly between the various media he has appeared in.

Lemarchand is only briefly touched upon in Clive Barker's novella The Hellbound Heart. Here, the toymaker is only referred to by his surname; he is described as having been an inventor of mechanical singing birds. His talent for music is referenced whenever the box lets out a rondo of pleasant sounds. Lemarchand's design is praised for its intricacy while at the same time referred to as perverse due to its complexity. Solving the box takes up several hours of the recipients' time.

The character later appears in the Epic Comics' Hellraiser series as an elderly mass murderer, though still a creator of toys and singing birds. He is in service to a Cenobite known as Baron, who supplies Lemarchand with bone and body fat needed for the construction of his mechanical boxes.

During the events of the fourth movie installment, Hellraiser: Bloodline, Lemarchand had been redesigned as a young 18th-century toymaker who is well known for his mechanical inventions and intricate designs. Unlike his comic counterpart, this version is actually an honest man in search of respect. He creates the puzzle box for the nobleman Duc de L'Isle, a libertine practitioner of black magic. Duc de L'Isle and his apprentice, Jacques, summon the demoness Angelique and have her bestow magical proporties onto the box. De L'Isle is betrayed and murdered by Jacques who would live on for 200 years alongside Angelique on Earth. Seeing the horrors for himself, Lemarchand designs a contingency in order to destroy the demons, a puzzle box known as The Elysium Configuration. He is unfortunately killed by Angelique before he could ever build his weapon. However, his descendants would inherit his schematics and build the device centuries later. The Merchant family would clash with the Cenobites on several occasions.

Lemarchand's box takes the form of an antique black lacquered rectangular lock puzzle or puzzle box, big enough to be held in the opened hand of a fully grown adult. Its surfaces hide several preasure points and buttons which in turn activate a series of sequences with varying effects ranging from the box changing shape, to removing individual parts, to playing prerecorded soothing music. Clive Barker describes the musical device during the very first chapter of his novella in detail: "a musical mechanism, which began to tinkle a short rondo of sublime banality". He further describes the sounds in later chapters as "getting louder and smoother with each new segment of the box opening up".

Within the Hellraiser movies, the Lament Configuration's signature black lacquer is trimmed with golden symbols which resemble various patterns of solar, square and floral images. Before the box opens a portal to the Cenobite realm, it reshapes itself in the form of a flower. This design has been used in subsequent appearances throughout the Hellraiser franchise, especially within the Epic Comics series.

In The Hellbound Heart, the source material for the entire Hellraiser franchise, the puzzle box is physicaly different. Lemarchand's box is described as having black lacquered walls with no decorations on the outside. The inner walls, however, bear a nearly imperceptible etching which distorts the recipient's image reflected on the inside surfaces. Disturbingly enough, the outer walls will display to the survivors the faces of the Cenobites' most recent victims.

Taking on the form of a puzzle-box, this item can be activated by pressing a series of hidden pressure points in a precise order. Very similar to a Chinese puzzle-lock box, the Lament Configuration changes shape in accordance to which button has been pressed. These shapes range from individual parts removing themselves from the main body, to the entire bulk of the box gaining the shape of either a flower or even a diamond. Operating the mechanisms behind the box requires the combined effort of both the right and left hands of the user, every finger having to squeeze and/or scratch the box's surfaces. Solving the puzzle accurately can take hours of one's time, although this has not been the case for most of the times. After the puzzle has been completely solved, the Lament Configuration will open up a portal to The Labyrinth. Within the Hellraiser universe, this realm is a parallel universe from which the Cenobites originate, as well as the home which they inhabit. This alternate plane of existence has been, on occasion, identified as the Hellraiser franchise version of Hell.

In order to create a gateway to the Cenobite home universe, the Lament Configuration literally warps reality around itself. The first sequence activates the configuration's musical device, letting out beautiful sounds. Around the second and third sequences, the box opens up a small portal to the other world, just big enough for the sounds of a large church bell to be heard. The bell's ringing signifies the coming of the Cenobites. Sometime around the box further disassembling itself, the portal begins engulfing the room around the recipient with pitch-black shadows and one of the walls starts glowing in a bright blue shimmer. Once the bell has ceased ringing, the Cenobites make their appearance from the illuminated wall, the blue light obscuring their frame.

The effects produced by the Lament Configuration are loosely different during Hellraiser movies. While the box does in fact engulf the room in shadows and lets out an ominous bell tone, the blue light primarily emanates from the local doors and windows. Before the Cenobites could enter the human world, the gateways to the other world let out jolts of lightning and strong gusts of wind which break any item caught in their way. Probably the best difference between the novella and the movies is the manner through which the Cenobites appear. In the movies, the Cenobites either spontaneously teleport via jolts of lightning, or walk through corridors opening up on the walls.

Emerging from their alternative home universe, the Cenobites are tasked with escorting the recipient of the box back to The Labytinth with them in order to suffer an eternity of unimaginable torture. Shortly after the Cenobites' departure, the Lament Configuration restores the room to its former state without leaving any clues as to the Cenobites' presence.

Aside from the standard function and usage of the Lament Configuration, this magical item can and has been utilized for other purposes.

Even with the core concept and abilities of the Lament Configuration having been well defined, the properties involving the portal's conception retain a few minor inconsistencies. As follows:

Barker's Hellraiser universe has on several occasions explored and demonstated the possibility of the existence of several other puzzle boxes.

During the final chapter of The Hellbound Heart, after protagonist Kirsty Cotton has been given the Lemarchand's Box for safekeeping, she is relieved after contemplating on the existence of puzzle boxes which can offer safe passage into paradise, rather than pain.

Doctor Phillip Channard, the main antagonist of the second Hellraiser installment Hellbound: Hellraiser II, is shown to have collected several puzzle boxes, all of which can be used to summon the Cenobites and are kept on display in the doctor's study. According to the film Hellraiser: Bloodline, these boxes are said to have been created by Angelique sometime between the 18th and the 20th century. The Host from the eighth Hellraiser movie, Hellraiser: Hellworld, is also a collector of puzzle boxes; here they are directly referred to as Lemarchand's Boxes. Only one of them is ever used in the entire film. Also of note, in Bloodline, the Space Station Minos from the year 2127, built and piloted by Paul Merchant, is in actuality The Elysium Configuration, a giant Lemarchand's Box with the power to either destroy or permanently trap the Cenobites with the use of light. The Merchant Building from the 1990s, featured in both Hellraiser III and IV, was designed by John Merchant and can also be used as a Lemarchand's Box. 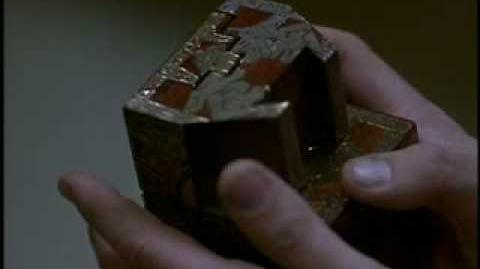 How the box works...
Behind The Scene of Lament Configuration.
Add a photo to this gallery

The Lament Configuration, alongside the Cenobites, has become an icon of horror and thus is often seen in other media as either an homage, rip-off or parody.

Retrieved from "https://evil.fandom.com/wiki/Lament_Configuration?oldid=102528"
Community content is available under CC-BY-SA unless otherwise noted.