The Evil Wiki
Register
Don't have an account?
Sign In
Advertisement
in: Magic, Formulae, Villainous Tools and Other Items,
and 2 more

To allow the Sanderson Sisters suck the life and youth of every child in Salem before the sunrise at the end of Halloween.

The Life Potion is a magic green elixir that enables a person to suck away the youth and life essence of anyone who drinks it and it is an item featured in the 1993 live-action Disney movie Hocus Pocus. It was the favorite creation of the Sanderson Sisters (Winnie, Sarah and Mary), as they made it with the aid of their Spellbook to begin their diabolical plan of draining the life energy of all the children in Salem, Massachusetts in order to be young and beautiful forever.

Rather than granting the drinker [eternal] life, it instead allows others to asborb the drinker's life force to replenish their youth.

In 1693, young Emily Binx under the spell of Sarah Sanderson's singing ran away from the sanctity of her home in Salem and followed Sarah through the nearby woods to her sisters' Cottage while the witches successfully brewing the Life Potion. When they tried to fed Emily the potion, her older brother Thackeray Binx came to rescue. He knocked out both Mary and Sarah by swinging at them with their cauldron full of Life Potion before spilling over the dangerous magic liquid, ruining the Sanderson Sisters' dream of eternal beauty. Winnie retaliates by striking Thackeray with magic lightning from her hands 3 times before he could grav his little sister. The sisters than looked at Emily Binx filled with a swirling white aura representing her life force. They realized not all is yet lost for the Life Potion works. They preceded to take her life by sucking her vital energy and youth three times before she was dead and they became young adult ladies.

3 centuries later, after the Black Flame Candle summoned them back from the grave for 1 Halloween night, the Sanderson Sisters recovered the Spellbook from both Max Dennison and his girlfriend Alison at his house while capturing both his 8 year-old sister Dani and Binx (Thackeray Binx in his immortal black cat form) and taken them back to their cottage. After fooling the Sanderson witches with his car's headlights used by Alison as false sunlight, Max than quickly kicked the cauldron containing mass quantity of brewing Life Potion and he left with Dani and Binx while hilariously left behind the 2 local bullies Jay and Ice in stuck in the Sanderson Sisters' cages. The 3 sisters who are still alive, wakes up and finds enough amount of the Life Potion admist the broken cauldron left for one vial. The angry Winnie decides to use the last potion on Dani for calling her "the ugliest thing that ver lived", in spite of both the Spellbook's vital ingredients for the potion Sarah's songful enchantment that has brought a large number of hypnotized children from all over the city of Salem to their house, the sisters have very little time to succeed in their plan.

Winnie on her flying broom than snatched Dani Dennison who abandoned her circle of salt protection to help the good zombie Billy Butcherson during the fight against the Sanderson Sisters within Salem's local cemetery. Before she could proceed using the Life Potion on the girl, Binx jumps at her and she drops the vial of Life Potion which fell in Max's hands and she threw him off her back and onto a rock below. Instead of smashing the potion, Max then drank it and takes Dani's place in order to save her from Winnie who tries unsuccessfully to absorb his life energy. This act has brought his friends enough time as the sun finally came and the Sanderson Sisters becomes doomed to be turned into glittering ashes upon death at last as their plan of achieving eternal youth via the Life Potion dies with them.

The Spellbook contains an important recipe, a list of things needed for concocting the Life Potion.

In the movie, Winnifred says: Mix blood of owl with the herb that's red. and turn three times, pluck a hair from my head. as part of the recipe but it was never written in the spellbook.

Bringeth (bring) to a full rousing bubble, then add two (2) drops oil of boil and a dead man's toes. Next add a dab of [green] newt saliva, dash of pox stir thrice (3 times). One final thing and all is done. Add a piece (spit) of thine (your) tongue. 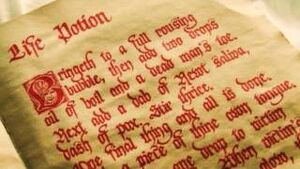 A recipe for the Life Potion found in a page from the The Sanderson Sisters' Spellbook. 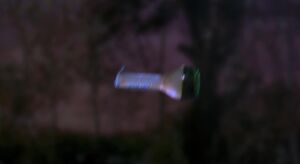 A vial of the Life Potion. 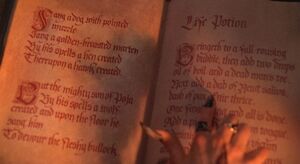 A recipe for the Life Potion found within one of the pages of the Sanderson Sisters' Spellbook.
Community content is available under CC-BY-SA unless otherwise noted.
Advertisement