The Evil Wiki
Register
Don't have an account?
Sign In
Advertisement
in: Article stubs, Mature, Pages with broken file links,
and 11 more

Limbo City is a twisted contemporary metropolis on Earth where demons secretly rule over brainwashed and weak humans, and it is also where the very heart of the inverse dimension of Limbo resides. It is the main setting of the 2013 reboot videogame DmC: Devil May Cry.

Limbo City, like the rest of the world, is controlled by Mundus and his demon armies. They constantly observe the populace through demonic CCTV cameras, and seek to keep humanity complacent and weak. It is a well-developed city filled with skyscrapers and burroughs, and includes the Funland amusement park on Bellview Pier. Sites of interest include the Silver Sacks Tower, the Raptor News Tower, the Virility factory, the St. Lamia's Orphanage, the city's main church St. Agares's Church, and the popular nightclub Devil's Dalliance.

In early trailers, Dante is apprehended and taken to the Limbo City Police Department and is later transferred to the mental hospital, where he is kept chained to the wall and given the designation of "64432B". However, these locations are not seen or even referenced in the finished game.

Bellview Pier is a Coney Island-inspired residential neighborhood, peninsula and beach located in the western district of Limbo City with its own carnival called "Funland" which contains the "Cobra" roller coaster and "Jackpot" arcade, a "Tarot" booth, and the "Hurricane" ride.

Devil's Dalliance is the city's most popular nightclub and it is run by the seductive demon mistress Lilith.

Raptor News Tower is a tall One Times Square-esque skyscraper and the second tallest building in all of Limbo City and it is built, owned and operated by the Raptor News Network, a news corporation within Limbo City with Bob Barbas, the media empire's famous newscaster and CEO, views Dante with disdain, and does not hide this fact in his reporting. This is where they monitor and spy on the planet's entire human populace through their network of satellites, routers and CCTV cameras.

Silver Sacks Tower is the city's most tallest skycraper with 2 angel-like wing features situated at the center of Limbo City and the world's most powerful investment bank. It is the headquarters of its namesake banking company called "Silver Sacks Investors" and they are both controlled by a wealthy investment banker named Kyle Ryder who is the demon king Mundus in his human disguise. This is also where the Hell Gate is located within his corporate office on the highest level of the building.

St. Lamia's Orphanage (also known as Saint Lamia's Orphanage) is the demon-run orphanage where Sparda left his seven-year-old son Dante after Mundus attacked their mansion. And is where Dante escaped during his childhood.

The Viirity Factory is a namesake factory that produces, manufactures and merchandises Virility, planet Earth's "#1" soft drink. And where "The Succubus" lurks hidden and deep underneath the factory and where her secretions serves as the beverage's psychotropic ingredient.

An overview of Limbo City. 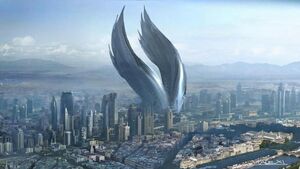 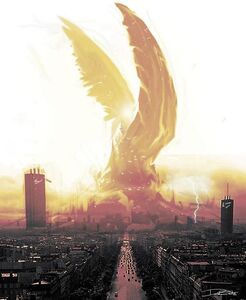 A concept art of the Silversacks Towers within Limbo City. 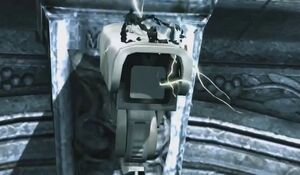 The true form of the security cameras used to spy on humanity everwhere. 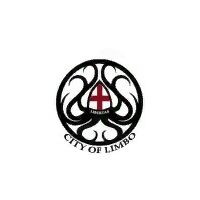 The official public logo of the Limbo City Police Department (aka LCPD).