The Evil Wiki
Register
Don't have an account?
Sign In
Advertisement
in: Technology, Villainous Tools and Other Items, Mechanical Modification,
and 4 more

To eliminate all opposing dissidents on behalf of Dr. Arliss Loveless and the Loveless Alliance.

This 1860s device launches a saw blade at the victim to kill them. The way it works is Dr. Loveless attaches a magnetic collar to the victim and puts them into a metal perimeter wire. The collar is connected to the machine. When the person steps out of the barrier, the collar activates machine and then launches one of its Loveless Disks, saw blades made specially designed by Doctor Loveless and etched with his infamous signature spider logo that also is the iconic emblem of the evil organization known as the Loveless Alliance. The collar magnetically attracts the blade and it keeps following the victim until it hits.

A man named Professor Thaddeus Morton, a kidnapped M.I.T. metallurgy expert, is running in an alfalfa field not far from a secret location outside New Orleans, Louisiana, in a desperate effort to escape his captors and try warning U.S. President Ulysses S. Grant of a very dangerous plot involving a spider-like war-machine while a saw blade is chasing Professor Morton due to a magnetic collar on his neck. Despite Morton's attempt to get away the saw blade ultimately catches and decapitates him. Professor Morton's head was unknowingly left behind by General Bloodbath McGrath who scornfully replied "And they say you scientists are supposed to be smart." as he picked up the saw blade.

The disk launcher is first seen onscreen after Jim West and Artemis Gordon wake up in a small perimeter fence near a cornfield with magnetic collars on their necks.

After Loveless departs to Spider Canyon on their train, Gordon reads a note that says "Gentelmen welcome to Loveless' experimental camp for political dissidents. There are no guards, no barbwire, as long as you stay in the designated perimeter you will stay alive". But West ignores the notes' dire warnings and steps out anyway causing the machine to activate and unleash it's saw blades. The saw blades chase West and Gordon through the cornfield until they make it to two opposite sides of the gully. When West and Gordon jumped the saw blades crashed into each other as the duo survived.

The machine alone with the disks may have been confiscated by the U.S. Army and both have became discontinued for a long time after the fall of the Loveless Alliance and the death of Dr. Loveless. 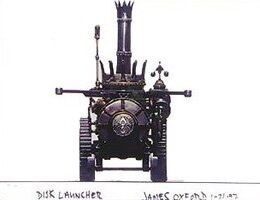