Sometime before the end of the Civil War

The townspeople of New Liberty

Able to travel on road, rail and water

To defeat and destroy enemies of both Dr. Arliss Loveless and the Loveless Alliance.

The Loveless Tank is a combat vehicle created by the mad Doctor Arliss Loveless. It is featured in the 1999 American steampunk western action comedy movie Wild Wild West based on the 1960s American old west TV series The Wild Wild West.

It was known to have played a major role in the massacre of a free slave town called New Liberty. It was later used as target practice on General Bloodbath McGrath's men, to McGrath's distraught. After the deaths of Bloodbath McGrath and his men the tank was later operated personally by Dr. Loveless, his mistresses and his men. They placed it on the railroad and connected it to Loveless' train. Then they proceeded to hunt down James West, Artemis Gordon and Rita Escobar. The next morning, Loveless and his group were in front of West and Gordon's train with the engineer giving chase but when they got to the other side of the tunnel Loveless had hidden his train using it's mechanical lifting legs.

After the train passed under them, Loveless gently placed his train back on the tracks and gave chase to West and Gordon's confusion. The tank fired a round at the train but missed, West uses Gordon's aggressor invention to board Loveless train and sabotage it but not before Mr. Hudson catches him and they fight with Mr. Hudson strangling him. Unfortunately West stabs Mr. Hudson with a blade in his boot. West then threw his body into the tank's funnel severely damaging the tank and the train but not before Munitia fires a grappling hook into West and Gordon's train. 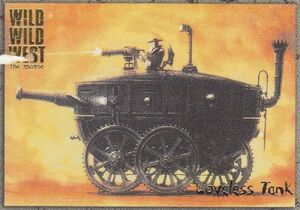 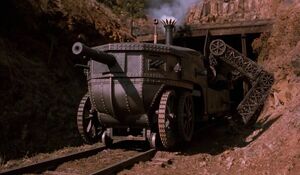 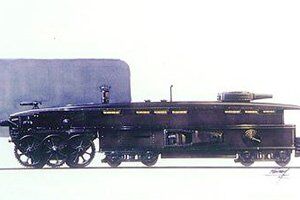 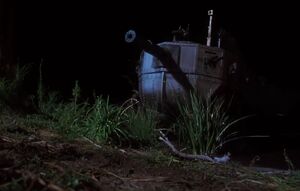 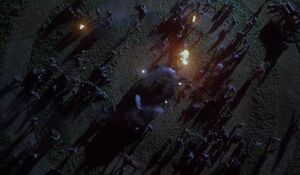 Add a photo to this gallery
Retrieved from "https://evil.fandom.com/wiki/Loveless_Tank?oldid=72547"
Community content is available under CC-BY-SA unless otherwise noted.