To plunge any world in the universe into a nightmarish state of chaos.

To initiate the magic of the Time Compression.

The Lunar Cry (in Japanese: 月の涙, Tsuki no Namida, lit. "Moon's Tears") is the name of a cataclysmic, supernatural phenomenon and it plays a major role in Final Fantasy VIII. This event is where creatures of the moon - monsters - fall to earth at regular intervals. Also the Lunar Cry was a major part of the evil sorceress Ultimecia's plan to complete a spell known as the Time Compression.

According to the Final Fantasy VIII Ultimania, the cycle began tens of thousands of years ago; a product of gravity, the phenomenon is similar to the pull on the tides; when the moon's surface reaches saturation point with monsters, it spills and falls to the planet. The monsters that appeared, can cause damage sufficient to destroy entire nations. The natural flora and fauna may change drastically; it has also been mentioned that the beasts can undergo change by being in touch with the monsters of the moon.

It is said that when the Lunatic Pandora is in perfect alignment with the moon, the Lunar Cry can be performed, and all sorts of strange and nightmarish monsters will be summoned to wreak infernal havoc on earth. Lunatic Pandora was constructed under the command of Sorceress Adel during her reign, likely to be used as a weapon in the Sorceress War. The only known incident of Lunatic Pandora having been used to induce the Lunar Cry under Adel's rule occurred in the Trabia region.

During his movie-making adventures in the Vienne Mountains, Laguna Loire spots the Lunatic Pandora in the distance, although he does not know of its significance. There are also 2 men talking on the bridge in Esthar City of this event during Squall and his party's first visit to Esthar. This Lunar Cry over Trabia is what likely caused the crater near Trabia Garden.

17 years after the end of the Sorceress War, Seifer, under Sorceress Ultimecia's orders, steers the Pandora towards Tears' Point, and uses it to induce the Lunar Cry with the intent of bringing Sorceress Adel's tomb back to earth. As a result, Esthar is flooded with an untold amount of monsters that overrun the country and Esthar City, causing massive casualties, as well as turning the sky a dark hue of red.

When the Lunar Cry sequence takes place, the track "Tears of the Moon" plays. It is the 18th track of Disc 3 in the  Final Fantasy VIII original soundtrack.

During the Dark Note of "Blue Fields" and "The Man with the Machine Gun", and the iOS exclusive "Don't Be Afraid", the sky color changes to red, a reference to the Lunar Cry. 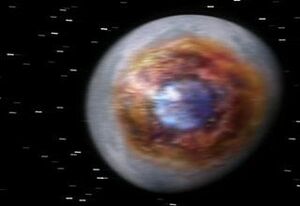 The Lunar Cry
Add a photo to this gallery

Retrieved from "https://evil.fandom.com/wiki/Lunar_Cry?oldid=48161"
Community content is available under CC-BY-SA unless otherwise noted.