The Malice World is a nightmarish other dimension comprised entirely of pure Malice and a location in Shadow Hearts: From the New World. The only ones who entered and traversed this world of darkness are both Professor Gilbert and Lady. Though elluded to many times throughout the game the area is little more than an endgame zone for high-level monsters before the climatic showdown with Lady. The only one way to enter the Malice World is through the Gate.

This supernatural realm is a void with an ever undulating yellow-to-dark red sky and a desolate rocky landscape littered with many gravestones on it's unhallowed grounds. The land is home to numerous monsters of extremely demonic and eldritch natures. Unlike their appearance outside the homeplane, all the residences are comprised for pure evil rather than possessed/infected by it.

The creatures are governed by pure nature and have no purpose outside of causing harm and pain. They surround and attack from the jagged and looming landscape up to the summit.

On this land lies both points of interest: a rocky hill-like impasse with a huge dead tree with a hole in it called "Beyond the Gate" and next to it is the decadent temple-like structure called the "Malice Umbrella", so named for the stone orb of demonic origin that is the heart of the Malice power and the source of the Malice world.

Because Lady is an avatar of Malice, the entire world responses to her wishes and she is little more than an extension of it given human-like conciseness and perspective.

The forces of Malice are not concerned with escaping, those that leak out seem uninterested in any sort of scheme to take over or destroy the mortal world, Lady for example had no desire but to return to her place of origin and only caused destruction and sadness as an inherent part of her nature on her way home. This seems to apply to all said monsters who only exist to cause pain and whom ambition and schemes are lost on. However, Professor Gilbert speaks of spreading the Malice to the mortal-world, in his eyes it is to bless the people of the world with the power that being possessed by Malice comes with and so any real danger of the Malice World, towards the mortal world comes almost entirely from Gilbert himself. 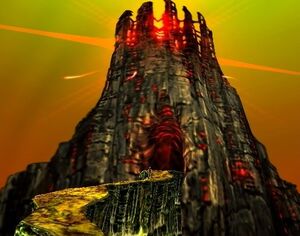 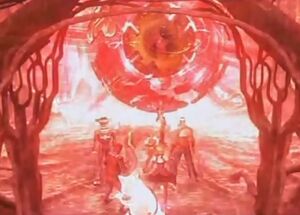 The Malice Umbrella, the source of Malice.
Add a photo to this gallery

Retrieved from "https://evil.fandom.com/wiki/Malice_World?oldid=67064"
Community content is available under CC-BY-SA unless otherwise noted.