Iron Man came here on a reconnaissance mission and battled the Mandarin. He came back to stop the Mandarin from destroying Stark's Observer Missiles, but, as his power began to run out, he was caught and tied up in unbreakable steel bands and put about dynamos that will destroy him.

Having then told the Mandarin that Tony Stark might have been outside somewhere, Iron Man managed to break free, recharge his power supply and finally destroy the Interceptor Ray used to divert the Observer Missiles. Iron Man came back to confront the Mandarin when he used a killer satellite to blast Stark's residence, but he was defeated and caught by Koto.

The golden avenger was fastened to a giant spinning wheel, but he eventually managed to break free, smashing through the castle wall. Some time after, using a certain amount of delta energy, the Mandarin conjured here the Swordsman, giving him a more powerful sword to seal their alliance. He then created an image of Iron Man which he sent to the Avengers, vouching for the Swordsman's membership.

According to their pact, the Swordsman was sent back to the Avengers Mansion with a nitro bomb to plant there and destroy them once Iron Man had come back in the team. Having the Swordsman removed the bomb and escaped from the Avengers headquarters, the Mandarin vowed to destroy him as well.

Anthony Stark was also brought here through a time/space continuum by the Mandarin, who was actually expecting to transport Iron Man. Once Stark had recovered his briefcase, which was thrown away into the castle moat by the Mandarin, he donned his Iron Man Armor MK IV and confronted the giant android Ultimo.

After the battle, the Mandarin ordered his guards to search for Stark's body in the moat, believing him already dead, but they could never find him.

Having seen Happy Hogan dressed up in the Iron Man armor to protect Stark's identity while he was in the hospital, the Mandarin thought he was the real Iron Man and immediately teleported him to his castle.

Iron Man soon reached the castle by rocket, defeated the guards and rescued Happy Hogan from his execution. While in the castle, Iron Man learned that they have altered the course of a test missile being launched in Beijing to target the United States. Iron Man redirected the missile to the Mandarin's castle and escaped with Happy, while the Mandarin was seemingly killed in the explosion. Some time later, the Mandarin was attacked in his own castle by Nick Fury and Yuri Brevlov, who where soon joined by the Hulk. During the battle the Hulk caused the Mandarin's castle to fall apart, while Fury and Brevlov managed to escape. With the Mandarin defeated, the Hulk walked away trying to sort out where he should go next.

Having then viewed the Hulk's battle with the Sandman on his video-scanner, the Mandarin established Sandman's exact position and took off on his suborbital rocket to join forces with him against the Hulk.

The Mandarin then watched the Inhumans routing his digging party for the buried Eye of Yin.

Many years later, the Mandarin created an anti-technology field all over China and kidnapped Iron Man in his castle.

Alerted by Lich, Force Works flew on the Hex-Ship Pegasus to Mandarin's castle to rescue their leader.

The ship shut down when they entered Mandarin's anti-technology field and crashed into the caste, while inside the Mandarin finally unmasked Iron Man and revealed him as Tony Stark.

After Force Works finally rescued Iron Man, they escaped from the Mandarin's castle without even being chased. Meanwhile, the Mandarin and his Avatars moved to attack Hong Kong.

Exhausted by the Parallax's power, the Mandarin withdrew from the battlefield and trasported himself back to his stronghold, where he promptly fell into a fitful, troubled sleep.

The Mandarin's Palace was featured in the cartoon show Iron Man: The Animated Series (also known as Iron Man). It is also known as the "Mandarin's Citadel".

The Mandarin's Palace made an appearance as a level in the videogame Marvel: Ultimate Alliance. 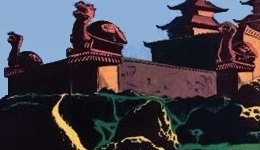 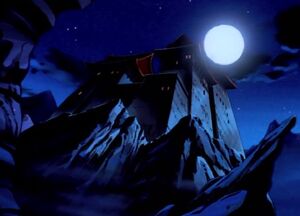 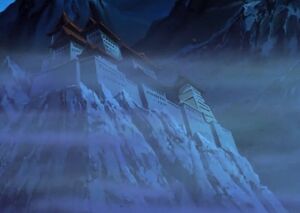 The Mandarin's Citadel
Add a photo to this gallery
Retrieved from "https://evil.fandom.com/wiki/Mandarin%27s_Palace?oldid=64138"
Community content is available under CC-BY-SA unless otherwise noted.