To serve as Cinder's personal weapon.

Midnight is the personal weapon of Cinder Fall from the American web cartoon series RWBY.

The origins of Midnight is unknown, but it is assumed it was created by Cinder using Dust before the events of the series.

When Cinder sneaks into the Cross Continental Transmit System during Beacon dance to upload into the Tower's systems, she is caught by Ruby Rose and proceeds to fight her. She summons her weapons from Dust in her clothing as blades and battles Ruby, later forming them into a bow. She fires three black obsidian arrows to make an explosion on the floor, stunning Ruby so she could make a quick escape.

In a flashback, Cinder recruits Emerald Sustrai and Mercury Black to help take out Amber, the Fall Maiden. They agree, and Emerald uses her Semblance to lure Amber out. After a battle between Amber, Emerald, and Mercury, Cinder stepped in and charged at Amber with her blades. She attempted to slice her, but Amber blocked each hit and kicked Cinder away. Cinder connected her blades together into their bow form, and launched three arrows at the ground creating whistling burning explosion. Amber was knocked away, her Aura depleted. Amber uses wind to knock her opponents away, then gets up and limps towards Emerald, intent on finishing her. Then, Cinder shoots her in the back with an arrow and incapacitates her. Amber falls, and Mercury and Emerald restrain her while Cinder uses her glove to steal some of Amber's powers. However, Amber is saved by Qrow Branwen, and the villains are forced to flee.

Cinder later uses Midnight at the end of a fight against Pyrrha Nikos. She used her Fall Maiden powers to weaken Pyrrha and deplete her Aura, then used her bow to shoot Pyrrha in the lower leg, crippling her. After a brief exchange between the two of them, Cinder pulls he bow and shoots Pyrrha in the heart, killing her and promptly burning her to ash.

Emerald, Mercury, and Cinder are currently residing in Salem's hideout.

When used as a bow, Midnight fires powerful arrows that cause large explosions. The blades are shown to be strong enough to block attacks, and Cinder can charge them with her power so they become fire blades.

Midnight appear as dark, charcoal color on over, with the bow form being same. They have many grooves and are angular in shape with a small hand guard arcing over the handles.

In a flashback, the weapon appeared with a brighter silver, more metallic color with brown patterns. 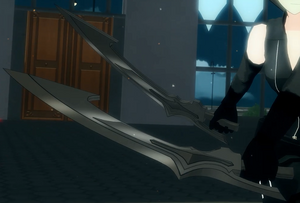 Cinder's weapon in a flashback (note the different colors).

Cinder about to kill Pyrrha.
Add a photo to this gallery

Pyrrha vs Cinder Full Fight
Add a photo to this gallery
Retrieved from "https://evil.fandom.com/wiki/Midnight?oldid=98521"
Community content is available under CC-BY-SA unless otherwise noted.