Misandry is treated in an off-hand way compared to Misogny, which is better known and thought of as to be of more concern. Some misandrists hate men because women were thought of as inferior than men but now women are treated better than before. Despite this, there are those who still hate men and will use the misandry as a justification, but they are no better than misogynists.

This phrase can lead to tricky interpretation that is sometimes actively milked by writers, usually of romance fiction. Usually the assumption is that the character doesn't like machismo, or she has bad luck with men in her life, like her father, other relatives, or Love Interests. That is, dislike of traits associated with men or of a particular man or men in her life manifest into a dislike of men as a whole. This can pose a problem for any male lead trying to woo her. As with all dislike tropes, the degree to which a particular character Does Not Like Men can and does vary, from simple discomfort around men to bitter disdain to active malicious hatred.

Often, the author portrays the woman in question sympathetically, as long as it comes form a bad experience, and vilifies whatever man drove her to hate the rest of his gender. If the reason they don't like men is because they were brought up in a society of institutionalized sexism, expect this character to be villified in some way, or at the very least treated as unsympathetic, usually resulting in a "Heel–Face Turn" where they get An Aesop in "Sexism Is Wrong" (or something along those lines). If they are otherwise a good person who just has the "wrong views", you have a "Licensed Sexist", and if the character actively hates men, welcome to your Straw Feminist. If they don't take a hint and never learn about equality, expect this person to be a villain for the long term.

Other times it is just used to explain why a character isn't ever seen with a man. It's frequent that eventually one character comments on this and takes it as a sign of sexual orientation. 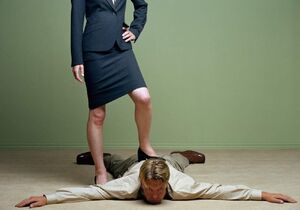 Misandry
Add a photo to this gallery
Retrieved from "https://evil.fandom.com/wiki/Misandry?oldid=53037"
Community content is available under CC-BY-SA unless otherwise noted.