Misogny is the hatred of women as well as violence directed towards them, it is one of the most common discriminations in the world and one of the most ancient - dating back for most of human history.

This trope is played for laughs more often than not — often a part of the personalities of the either 2 TV Tropes terms, "Unsympathetic Comedy Protagonist" or "Butt-Monkey". In earlier works a character's outright fear of women was treated as a running gag. Dramatic protagonists who do not like women usually do not like other men that much more. Perpetrators in crime dramas will often have this as the root rationale for their crimes against women.

Women who don't like men will often be portrayed sympathetically, but members of this trope are usually written to receive character development.

In this case, in the hit show The Little Rascals, the young males who held meetings of the "He-Man Woman Haters Club" on more than one occasion, including the animated episode "Beauty Queen for a Day".

If the male in question has never hit puberty yet, that is what it is childishly called "Girls Have Cooties".

Many countries continue to treat women extremely poorly and some groups, religions and individuals try to justify this oppression with many varied ways: some of the more popular are arguing God created woman for man to treat as he wished, Eve being the reason for sin (and thus weaker than Adam) and the imagery of old women being "wicked" witches during the era of the Witch-Hunts.

The opposite of Misogny is Misandry. 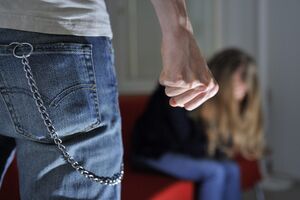 Misogny
Add a photo to this gallery
Retrieved from "https://evil.fandom.com/wiki/Misogny?oldid=53036"
Community content is available under CC-BY-SA unless otherwise noted.