The Mojo Temple is temple located in Cortex Island where Uka Uka was confined and serves as Cortex's council location in the Crash Bandicoot series.

In exterior in temple has the shape of a hippo-like head with stair in big mountain and full with totem pillars. In interior contains statues, sun pictures and torch basins. It was revealing in the sewers the lava pit in temple.

Eons ago, this temple is built by Aku Aku for lock his younger twin brother Uka Uka in underground. To prevent anyone from unintentionally releasing his evil brother from temple prison, Aku Aku created several traps as: basins, hidden spears and crush walls.

Several eons later, the temple prison was Cortex for sought advice for world domination and temple became the Cortex's council location when same built his castle.

This temple is invaded by Crash Bandicoot twice. First when he back in Cortex Island by save his girlfriend Tawna and second one year when he enter in deep from castle sewers.

When N. Brio destroy the Cortex Vortex spacestation with his laser, Uka Uka's temple prison is blow up by station piece releasing the same. 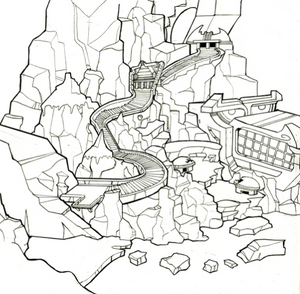 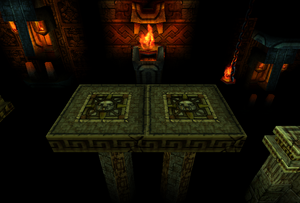 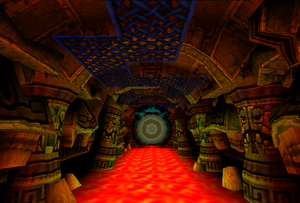 Lava Pit
Add a photo to this gallery
Retrieved from "https://evil.fandom.com/wiki/Mojo_Temple?oldid=55113"
Community content is available under CC-BY-SA unless otherwise noted.