Morgana's Ice Cave is an iceberg cave in the Arctic that is home to the evil sea witch Morgana. It is a location in the direct-to-video Disney animated feature The Little Mermaid 2: Return to the Sea.

Morgana always plans and plots within her cave where she calls home.

Melody, daughter of Ariel and Eric, was led to the sea witch Morgana by her evil sidekick Undertow so she can asked her for her help.

She told by Undertow that Morgana has great magic powers. Morgana than turned Melody into a mermaid but tempoarliy as part of her plan to manipulate the young girl to steal the trident that belonged to her grandfather, the sea king Triton of Atlantica.

Morgana after successfully tricked Ariel's daughter Melody into getting her grandfather's royal Trident for her, rose out of her ice cave and decleared herself queen and ruler of the seas. She magical made her cave into a huge icy palace while she wields the trident. Melody retrieved the trident back from her and returned it to her grandfather, King Triton who turned Morgana into a block of ice as her own lair soon later collapsed. 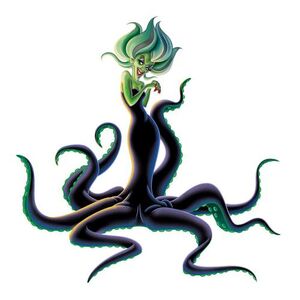 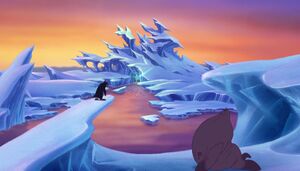 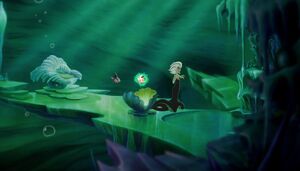 Morgana and Undertow at her Ice Cave. 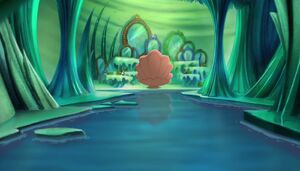 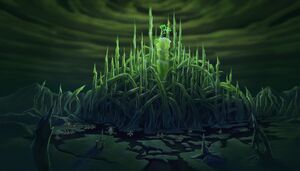 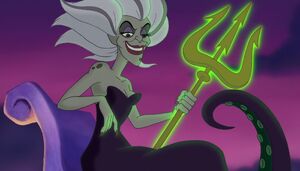 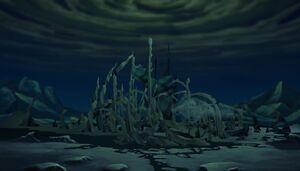 The destruction of Morgana's crumbled Ice Cave.
Add a photo to this gallery
Retrieved from "https://evil.fandom.com/wiki/Morgana%27s_Ice_Cave?oldid=115773"
Community content is available under CC-BY-SA unless otherwise noted.