The Moron Mountain is a failing intergalactic amusement park owned and run by the greedy alien businessman Mr. Swackhammer and a location in the 1996 family live-action/animated sports comedy movie Space Jam.

Moron Mountain is shown to be a grey planet with large bright green neon sign around it, but on the top lies an amusement park with the entrance modeled to look like Mr. Swackhammer's face.

When a young costumer complain to his father that this place stinks during their short-lived visit, Mr. Swackhammer who hear this scornful and opprobrious remark via his security cameras, told his Nerdlucks that they need new attractions for the park in order to attract more customers and more money, so they discovered the Looney Tunes and were ordered to bring them here by force, but the plan failed due to the Monstars losing the basketball game, Mr. Swackhammer being sent to the moon by them after a lifetime of his abuse towards them and the Nerdlucks wanting to stay on Earth with the other Looney Tunes.

After that it was never shown, but it is possible that Moron Mountain was eventually shut down and turned back into a regular planet. 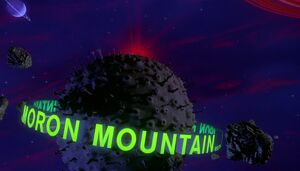 A view of Moron Mountain. 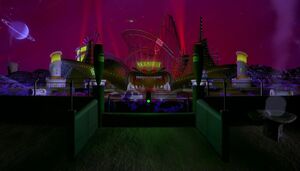 One of artist Roy Naisbitt's concept drawings for the Moron Mountain sequence in the movie Space Jam. 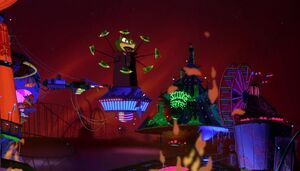 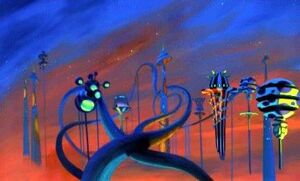 The Moron Mountain theme park.
Add a photo to this gallery
Retrieved from "https://evil.fandom.com/wiki/Moron_Mountain?oldid=63904"
Community content is available under CC-BY-SA unless otherwise noted.