N's Castle, sometimes referred to as "The Castle", is the location where Reshiram or Zekrom can be caught. It is Team Plasma's main headquarters, and is owned by N.

The Team Plasma Grunt in the Pokémon League Pokémon Center and Looker refer to the castle as Team Plasma's castle.

After the events here in Black and White, the castle cannot be visited again. However, in Black 2 and White 2, the player can access its ruins from Victory Road. In these games, its location is unmarked on the map until player visits it.

After defeating the Elite Four, this castle rises from the ground and attaches itself to the Pokémon League building. According to a Team Plasma Grunt, the castle was being secretly built for several years by overworking Pokémon that were taken away from other Trainers.

As the player enters the first floor, six of the Seven Sages attempt to stop him or her. However, the Gym Leaders of Unova (with the exception of Cilan, Chili, and Cress as Bianca was apparently unable to reach them in time) intercept the surprise attack, allowing the player to continue.

On the second floor, a member of the Shadow Triad directs the player to a room where two women await him or her, introducing themselves as Anthea and Concordia. Anthea heals the player's party and Concordia tells the player about N's childhood. A room on the third floor contains a PC that will allow the player to rearrange the party as well. In the same room, scientists mention that now, they could infiltrate the Pokémon Storage System to even release the Pokémon from Trainers' PC Boxes. Team Plasma Grunts are scattered about the other rooms; however, they will not fight, celebrating victory, or thinking of saying goodbye to their Pokémon. One of these Grunts will allow the player to return to the Pokémon League.

N's room resides on the fourth floor. It is decorated in a childish manner, with cloud wallpaper and floor covering as well as there being many toys strewn about the area, many of which can be interacted with. Some of them show sign of recent usage (such as the train set) and some of which denote usage by Pokémon as well as humans, such as the skating ramp which upon inspection is covered in claw marks and scratches. There is a home basketball hoop installed on the west wall, before which lies a basketball with the word "Harmonia" inscribed on it—N and Ghetsis's surname. Right before the final battle with N, the legendary mascot of either Pokémon Black or Pokémon White emerges. The respective legendary Pokémon can now be caught, and if there is space in the party, the legendary Pokémon will be used in the battle against N, where it is also first in the party. Otherwise, it is possible to swap the legendary Pokémon from the PC to the party.

During the battle with N, he uses the legendary Pokémon opposite of the game's mascot.

After defeating N, the player must battle Ghetsis, who reveals that he was manipulating N and Team Plasma in order to achieve his own goals.

The ruins of N's Castle can be accessed from a large cavern that is located within Victory Road. However, the remnants of the castle can only be accessed after the player has entered the Hall of Fame.

After catching Zekrom/Reshiram, N appears in Nimbasa City near the Rondez-View Ferris Wheel every Friday. After a ride with him and having battled Kyurem in the Giant Chasm, he returns to his castle for a rematch with different Pokémon depending on the season.

N's Castle was first seen in a flashback in "The Name's N!" of the Best Wishes anime series. When Ash told N how he and his friends were trying to find Reshiram, N had a flashback of his youth, a moment when he had been at his castle, which, along with its surroundings, had been on fire. He saw Reshiram appearing before him, and kept looking at it as it flew away.

The Castle was also seen in a flashback in "Secrets From Out of the Fog!", where a ceremony involving N and led by Ghetsis and the Seven Sages was taking place, when suddenly Reshiram appeared, setting the castle ablaze with its Fire attacks, preventing the ceremony from being completed, much to Ghetsis's anger. 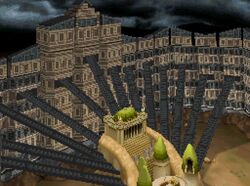 N's Castle
Add a photo to this gallery

N's Castle is Team Plasma's main base of operations and it debuted in the manga "Listening to Pokémon" in N's flashback of his coronation as king of Team Plasma. During Team Plasma's attack on the Pokémon League, Zinzolin summoned the castle via remote control. The castle then rose from the depths of the earth, surrounding the League building. Team Plasma Grunts emerged from the castle and surrounded the League viewers, while the Seven Sages and N watched from above as the chaos took place. N and Black had their final battle on top of the castle, which eventually moved to inside. White found her way in N's room after being teleported there by Hood Man, where she met Anthea and Concordia.

Retrieved from "https://evil.fandom.com/wiki/N%27s_Castle?oldid=41988"
Community content is available under CC-BY-SA unless otherwise noted.