The Necroa Virus is the second special plague in the strategy online videogame Plague Inc.. It has abilities of reanimating dead people (if the Cytopathic Reanimation symptom has been evolved), this plague can be bought for $ 1.99 USD or beating the Neurax Worm plague in Brutal mode in mobile devices or beating Prion disease in Normal or higher in the PC version

The Necroa virus has capabilities of bringing the dead back alive, but only if Cytopathic Reanimation symptom has been evolved, as said above. It has "Extreme regenerative capabilities" and various traits to help zombies in combat.

This plague is very easy to cure, that means players need to use symptoms/abilities that delays cure procedure, doing so the player must gather DNA points to evolve abilities/symptoms/transmission so they can infect/zombify the world, however, if the cure is 100% done, its game over.

If the cure is 100% done, but you evolved Cytopathic Reanimation, there is no turning back, world will notice that people are turning in cannibal brain-eating mindless people, they will do their best to destroy the plague, sometimes, an military force called the Z-Com will create it's base somewhere, that means that certain country is now protected by Z-Com, evolving zombie traits give them strength to fight against the humans and eventually eradicate them.

If every Z-Com base is destroyed and there is a small amount of survivors in the world, then you are about to win, humans are going to be eradicated and zombies will keep living in the world, not for too long, without humans or animals, there is no food for zombies, so they will die and the world will be empty.

Horde Instinct - Zombies can walk in hordes through land & water.

Lots and lots of zombie abilities can be found in-game like them decomposing slower or having more zombies in the horde etc... 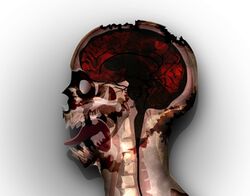 The Necroa Virus
Add a photo to this gallery
Retrieved from "https://evil.fandom.com/wiki/Necroa_Virus?oldid=26179"
Community content is available under CC-BY-SA unless otherwise noted.