Ruby the Dark One (author; formerly)

Those whom possessed/reanimated by the Kandarian Demon's Deadite forces

Control the Kandarian Demon's rampage and harness its necromantic powers whilst keep it under control (all of these only apply for those who possess proper knowledge about the book).

To be read and to harness the power and knowledge of the Dark Ones.

The Necronomicon Ex-Mortis is the dark grimoire (textbook of magic) and the recurring villainous object in the Evil Dead series.

Events of Ash vs. Evil Dead revealed that the Necronomicon Ex-Mortis, the very book that caused Ash’s conflict against the Kandarian Demon and the Deadites was created by the "Dark Ones": a group of Eldritch beings. Neither human nor demon, these beings were also responsible for the creation of the Kandarian Dagger.

The book itself was formed of the flesh of the 'Damned Ones', created for use primarily as a weapon against humanity. The passages and spells within the book were inked in human blood, the most significant of which was designed to open a portal to the underworld so the Kandarian Demon and its deadite minions were then able to enter Earth and become the conjuror’s minions.

Necronomicon Ex-Mortis possessed various dark powers, such as summoning and control Kandarian Demon and it’s Deadite minions as well as to create portal which the destination could be either to the past or to the surreal underworld where the evil beings like Deadites reside. Though the book itself contains various dark spells, the book itself was more like a mere tool or pasageway for Kandarian Demon and Deadites to Earth. The book also revealed the existence of The Chosen One, an individual whom can fight the evil that summoned with passage inside the book. The powers can also affect the inanimate object such as trees or dolls (as seen in Episode 1 of Ash Vs. Evil Dead where a Deadite possessed a doll that quickly killed by Pablo).

Direct sunlight, though, can release those possessed from the affliction (as seen in Evil Dead II when Ash is released from possession. Also the book, supposedly, has the ability to return the evil it awakens back to sleep, or restore people to normal (though this is suggested to be possible it is never shown to happen). The book even had a limited sentience due to it's malevolent nature where it's face sometimes animates and goads/taunts those around it to use it (Ash caused it to animated by accidently soaked it with blood when he busily dismembering the lesser Evil Ash and Fisher's bodies). The book can also "bleeds" when cut with Kandarian Dagger.

In spite of the danger that the book pose due to passages and spells that written on it (as well as various malevolent curses), the book itself is harmless and only posed the serious threat to everyone once fell onto the hands of evil (like either Dark Ones or Deadites and Kandaran Demon considering that they coveted it due to it’s powers would bring them to their knees) or those whom lacks the proper knowledge and experience over the handling the effect of the spells and passage inside the book. This was proven where Professor Knowby, who recites the contain of the book without the proper knowledge about it’s spells and passage inadvertly caused disasters began from the events of the films started from the events of The Evil Dead.

In The Evil Dead until Evil Dead, there are 6 variants of Necronomicon Ex-Mortis the first 5 used to control Kandarian Demon where the other controlled Taker of Soul, which are:

Notable incantations in the book includes:

The Dark Ones, the original owners of Necronomicon Ex-Mortis. 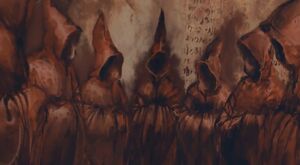 Dark Ones, the original owners of Necronomicon Ex-Mortis.
Add a photo to this gallery
Retrieved from "https://evil.fandom.com/wiki/Necronomicon_Ex-Mortis?oldid=115969"
Community content is available under CC-BY-SA unless otherwise noted.