The Negaverse is a dark dimension in the original English Dub of the Sailor Moon anime produced by DIC. In the Japanese version, the manga, and the later English redub of the anime produced by VIZ Media it is called the Dark Kingdom. Queen Beryl is the leader of the Negaverse, and second only to the Negaforce. There were four commanders as well, as well as Negamonsters (Youma in the Japanese version) that are from the Negaverse itself.

One day, Beryl and the Negaforce attacked the Moon Kingdom. The Negaforce defeated the Sailor Scouts, and Beryl took Princess Serena and Prince Darien. Queen Serenity had no choice but to use up all her power to unleash a Cosmic Moon Power attack that sealed the Negaforce, Beryl, and all their minions inside the Imperium Silver Crystal. The reason Serenity did not destroy them was because this would destroy Serena and the others too, and therefore they were sealed inside the crystal as well. Before dying, Serenity sent them into the future to be reborn on Earth.

Somehow the Negaforce, Beryl, and the others were released as well, and resumed their evil plans in the Negaverse. The Negaforce's power seemed weakened as she was inside a red orb and Beryl planned to release her. First, she sent Jedite (Jadeite) to gather energy for the Negaforce. He would steal energy from many people at once, but all of his plans were foiled by Sailor Moon, Sailor Mercury, and Sailor Mars. Beryl gave Jedite a final chance to defeat the Sailor Scouts, and when he failed, she condemned him to eternal sleep.

Next, Beryl sent Neflite (Nephrite), who would steal energy from one person whose energy was at its peak, using a Negamonster to absorb their energy, but his plans were also foiled by Sailor Moon. Soon Beryl began to go about finding the Imperium Silver Crystal so she could use its power to release the Negaforce. Eventually Neflite betrayed the Negaverse for Molly (Naru), and his rival Zoycite (Zoisite) had him killed, taking his star crystal which he created in an attempt to track the silver crystal.

Beryl told Zoycite and Malachite (Kunzite) about the Seven Shadows, the most powerful Negamonsters who were sealed inside the seven Rainbow Crystals and reborn inside humans. Using Neflite's star crystal, Zoycite tracked down the seven rainbow crystal carriers, extracting the crystal (although she only got four, two were taken by Tuxedo Mask and one by Sailor Moon) and awakening the Shadow within them. However, Sailor Jupiter joined the Sailor Scouts, and Sailor Moon destroyed the Shadows by healing the humans they were possessing.

Afterward, Zoycite forced Sailor Moon to give her the one crystal she got. Then Malachite trapped the Sailor Scouts in a dome and sucked their energy while Zoycite tricked Tuxedo Mask by pretending to be Sailor Moon in a trap, and then stabbed him. But before she could take his crystals, or before Malachite could force him to hand them over, Sailor Venus attacked Zoycite on the first occasion and Malachite on the second, releasing the Sailor Scouts, and Beryl was forced to recall Zoycite and Malachite even though they didn't get the crystals.

Zoycite, having discovered Tuxedo Mask's true identity as Darien (Mamoru), challenged him to a battle over the crystals. Ironically Serena (Usagi), whose identity as Sailor Moon Zoycite was unaware of, was taken along for the ride. Zoycite double-crossed Darien as Malachite took his crystals. Darien scratched Zoycite's face with a rose, and she attempted revenge on him by stabbing him with an ice crystal, nearly killing him. This was against Beryl's orders, as she wanted Darien turned evil. When Sailor Moon awakened as Princess Serena after the Rainbow Crystals became the Silver Crystal, she defeated Zoycite, who was then killed by Beryl as punishment for disobeying her. Malachite attempted revenge on Sailor Moon but was defeated.

Malachite's next job was to find Sailor Moon and take the silver crystal from her. With assistance of a Negamonster possessing a human, he would set up an event to draw her in, while Beryl and the Negaforce turned Darien evil. Darien would often compete with Malachite, and was healed by Sailor Moon but recaptured by the Negaverse, and in the process Neflite's Black Crystal, which Darien was using to recapture the crystal carriers to use the deceased Shadows' energy to create an invincible shadow warrior, was destroyed.

Beryl asked the Negaforce for one more chance, and the Negaforce merged with her into a giant Beryl (though she is only referred to as "Beryl" in this form, it is believed by some that the Negaforce is possessing her). Sailor Moon transformed into Princess Serena and fought her. She entered a beam struggle with her, and, powered up by the spirits of the other four Sailor Scouts, Serena overpowered Beryl and destroyed her along with the Negaverse itself. With this, all the Sailor Scouts were revived, although they, Serena, and Darien lost all memory of the battles with the Negaverse and being Sailor Scouts.

Beryl and the Negaforce had connections to the villains in Sailor Moon R. Alan and Ann's alien race was corrupted by the Negaverse long ago, and all were killed except for Alan and Ann. Sometime before her death, Beryl told Alan and Ann about Earth, and they eventually came to Earth to gather energy for the Doom Tree, employing similar tactics to the Negaverse with monsters called Cardians playing the same role as Negamonsters. They later discovered that the Doom Tree needed love energy to live, and Sailor Moon destroyed all negative energy in the Doom Tree, who left with a redeemed Alan and Ann to live in peace.

Wiseman, the Doom Phantom, comes from the Negamoon, home of the Negamoon Family, which is said to be a dark moon of the Negaverse, powered by the Dark Crystal. It is unknown whether he had ties with Queen Beryl, or possibly even the Negaforce, but possible. In the future, when Prince Diamond, Sapphire, Rubeus, Emerald, and the "Negamoon Sisters" left as they did not wish to stay on Earth after a battle, they found their way to the Negamoon where they were corrupted by Wiseman, with dark crescent moon symbols on their foreheads. Most of them turned good except Rubeus and Emerald, who were killed, and when Sapphire and Diamond realized Wiseman's plan, he killed them as he had intended all along. In the end, Wiseman and the Dark Crystal were destroyed by Princess Serena and Rini, ending any known remnants of the Negaverse. 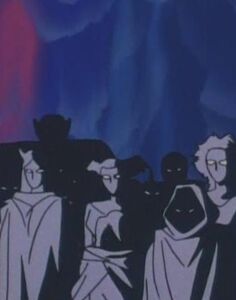 The evil people of the Negaverse. 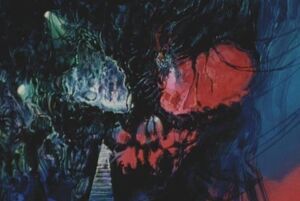 The true and frightening world of the Negaverse. 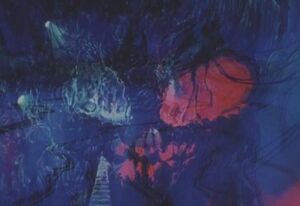 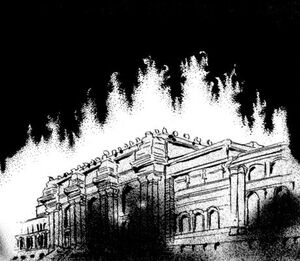 The Dark Kingdom (Negaverse) as depicted in the Sailor Moon manga. 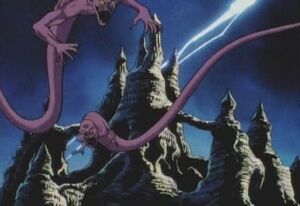 A possibly original depiction of the Dark Kingdom (the Negaverse) with a gigantic evil palace and flying, dark Negamonsters surrounding it in the Sailor Moon anime. 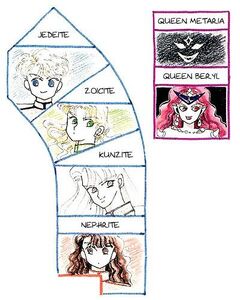 Known inhabitants and members of the Dark Kingdom (Negaverse). 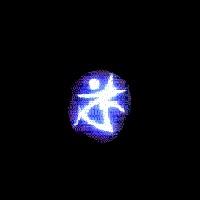 The symbol of the Negaverse (also known as the Dark Kingdom).

The symbol of the Negaverse (also known as the Dark Kingdom).
Add a photo to this gallery

Retrieved from "https://evil.fandom.com/wiki/Negaverse?oldid=48069"
Community content is available under CC-BY-SA unless otherwise noted.