Nockmaar was an oppressed Daikini (human) country ruled with an iron fist by the vile witch Queen Bavmorda, and one of many locations in the 1988 fantasy movie Willow. It also appeared as a location in the 1988 videogame adaption Willow, the film's novelization Willow: A Novel, the 90-page roleplaying game sourcebook The Willow Sourcebook, and Shadow Star of the Chronicles of the Shadow War book trilogy.

Bavmorda herself established this land as her own kingdom during the so-called "Time of Whispers" that all began when Bavmorda, then queen consort of Tir Asleen, ruled in place of her husband, King Tanthalos IX, whom she had bewitched into total obedience. The years that followed her marriage brought many crimes against the population, from secret trials and public executions to ruinous taxation and unceasing war. Curfews were imposed, legal torture became a common sight, and the Queen's death squads walked the countryside. In the orchards and lakes of Tir Asleen, monsters began to appear.

After the birth of their daughter Sorsha, Bavmorda ended up freezing the king in crystal along with the rest of Tir Asleen. She then moved her base of operations to the land of Nockmaar with all the resources of her late husband's kingdom where she built the Nockmaar Castle at the heart of the land's namesake valley, where she continued her reign of terror as this wilderness becomes her war machine and her own empire.

The Time of Whispers came to an end with Queen Bavmorda's death during the Battle of Nockmaar when the novice wizard named Willow Ufgood came to the rescue of the chosen child Elora Danan and makes Bavmorda believe that he has transported Elora to a realm of pure goodness where evil cannot touch her, and in her surprise, she accidentally spills the potion she created on herself instead, banishing her own spirit to the Netherworld forever via the dreaded Ritual of Obliteration.

The Nockmaar Valley ran between the black mountains of the Nockmaar Range. Initially, Nockmaar was a forest wilderness owned by the ancient Faery race known as Malevoiy for an undetermined number of years before the Daikinis (tall people).

Bavmorda later transformed the valley, along with the rest of the land, into a war machine, having its forests chopped down and ordering the construction of a volcanic stronghold, the Nockmaar Castle.

The Nockmaar Castle is a huge stone, volcanic bastion, home to Queen Bavmorda. It is where the final battle between the free kingdom of Galladoorn and the tyrannical kingdom of Nockmaar took place here. 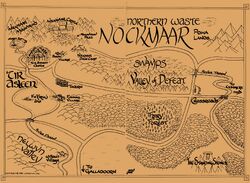 A closer view on Nockmaar Castle.
Add a photo to this gallery
Retrieved from "https://evil.fandom.com/wiki/Nockmaar?oldid=18781"
Community content is available under CC-BY-SA unless otherwise noted.