The Santa Clause 3: The Escape Clause

To be simply the most fun and profitable place for children of all ages as long as Jack Frost remains the new Santa Clause.

The North Pole Resort is an exclusive and twisted mall-like theme park that is both the corrupt alternate-reality version of the North Pole and the evil Jack Frost's grand personal utopia as well as the representation of his own version of Christmas called "Frostmas". It is a location in the 2006 holiday fantasy comedy adventure movie The Santa Clause 3: The Escape Clause.

Since Jack Frost traveled 12 years back in time and stole the Santa suit from the previous Santa Claus in 1994, he immediately took over Christmas and turned the North Pole into a thriving but oppressive theme park business without keeping the North Pole secret from the whole world which is an important part of the "S.O.S." ("Secret of Santa") and caring the true meaning of Christmas in spite of his newfound "glowing" reputation. This overpriced tourist resort is an eerie cross between a West County mall and Las Vegas lounge with a Broadway-styled pavilion stage built into the main building's foyer and is filled with overpriced gewgaws, shows and rides.

Every December in each year, the North Pole Resort opens to the public and it teems with whining children and stressed-out parents. It is where cheap songs are about "Frostmas", and parents pay to have their children put on the nice list (or poorer families can at least get a toy made for undeserving spoiled brats). Scott also sees how miserable the elves are, unlike the productive workers they were when he was Santa, and the Reindeer are all confined to a petting zoo, in front of a line of impatient children waiting to pet them.

The rightful previous Santa, Scott Calvin, after he was tricked by Frost into activating the magic of the Handbook of Christmas' secret clause called the "Escape Clause" by wishing he was never Santa Claus at all, travels to the North Pole via the commercial airplane with the logo read "Northpole Airlines". He later appears in Frost's twisted mall-like version of the North Pole. He explains he took away the spirit of Christmas Santa gives and "bring whoever could afford to buy presents up here," and concludes by saying "Who needs magic?" He then gives Scott a "commemorative" voice recorder pen and says the magic words "I wish I never been Santa at all" needed for the Escape Clause. Scott tricks him into repeating it and at the same time clicks the pen, thus making the words Jack said the recording on it. Jack makes his security guards take Scott to a seat so he can "enjoy the show". Jack then performs a twisted version of "New York, New York" ("North Pole, North Pole"). Afterwards, he gets kicked into a pile of gifts by Scott Calvin. However, evading the security guards, Scott falls into Jack's miniature house and was overpowered again. But, with help from Lucy, he gets Jack's snow globe and activates the Escape Clause via the recording on the pen. They again go back in time through the 12 years. This time, though, Scott Calvin overpowers Jack and has his old self put on the suit. He regains his position as Santa while Jack becomes Jack Frost, thus Jack's North Pole Resort has now been erased from existence.

A North Pole-themed commercial airline with airplanes that serves as the only means of transportation to Jack Frost's North Pole Resort.

A reindeer-themed shooting range next to the Santa Stills gift shop.

A photo gift shop next to the Reindeer Gallery where people took photographic pictures of themselves and their families, sometimes in the cutout figures of Santa Claus and his elvish Helpers.

A first kiosk used for allowing people and their children to build toys and either get them for free or buy them soon afterwords.

A second kiosk used for allowing people and their children to build Santa Clause statuettes and dolls and they all either get them for free or buy them soon afterwords.

A third kiosk used for allowing people and their children to build Christmas elf statuettes and dolls and they all either get them for free or buy them soon afterwords.

A petting zoon filled with confined unhappy reindeers and miserable elves tending to the care of these poor animals while they forcibly tolerate the line of visiting adult customers and impatient children.

An attraction area filled with many snow globes inside this corridored chamber. However, this is an arouse for thebtue Hall of Snow Globes still lies behind the vending machines in the room above the main foyer in Santa's Workshop.

The main kiosk where families purchased for the names of their children on Jack Frost's own Nice List.

A Broadway-styled pavilion stage built into the indoor foyer of the North Pole Resort. Surrounding the foot of the stage are hundreds of blue Christmas gift boxes.

Appearance in other media

The North Pole Resort is the final level of GameBoy Advance videogame The Santa Clause 3: The Escape Clause based on the movie of the same name. It has 4 levels: "Carnival of Ice", "Polar Escape", "Ticket to Glide", and "Father Frostmas". The resort is full of Jack Frost's security guards with their single touch-freezing magic, enchanted snowman, flying white bats and other obstacles including sharp icicles and pits with frozen mechanical gears. Jack Frost himself who reigns over this wintry amusement park as it's "Santa Claus", is the game's main antagonist and final boss. 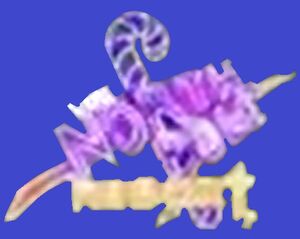 The official logo of the North Pole Resort as seen in the videogame he Santa Clause 3: The Escape Clause. 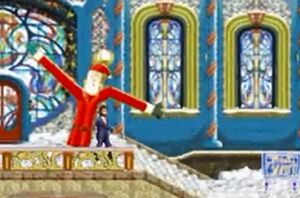 One of giant inflatable Santa Claus balloons found outside the North Pole Resort in the videogame The Santa Clause 3: The Escape Clause. 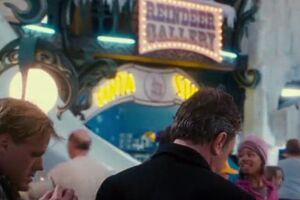 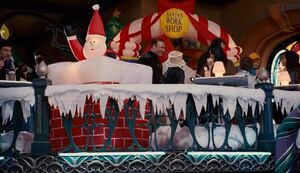 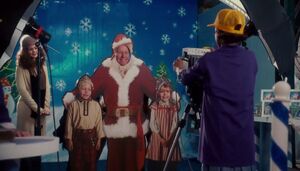 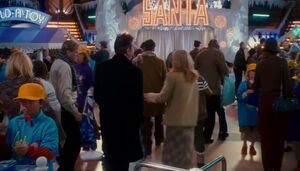 The wintry decors among many things inside the North Pole Resort. 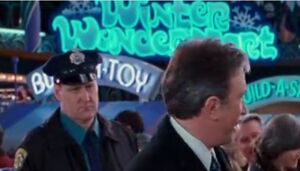 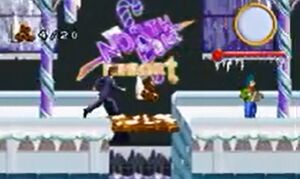 Giant, frozen candy cane-themed pillars within the North Pole Resort as seen in the videogame The Santa Clause 3: The Escape Clause. 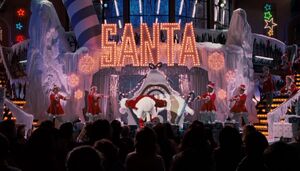 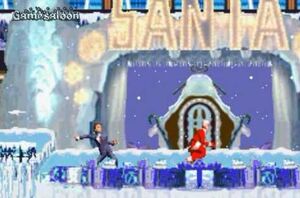 Scott Calvin vs. Jack Frost as seen in the videogame The Santa Clause 3: The Escape Clause. 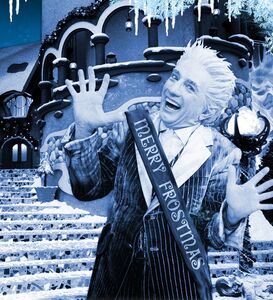 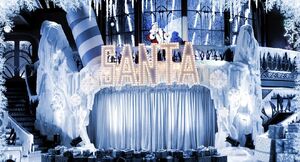 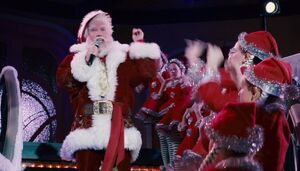 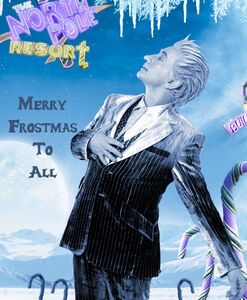 Merry Frostmas to all & to all a good night.
Add a photo to this gallery

Retrieved from "https://evil.fandom.com/wiki/North_Pole_Resort?oldid=95542"
Community content is available under CC-BY-SA unless otherwise noted.