Nurgle's Garden (also known as the Garden of Nurgle) is a demonic dimension within the Realm of Chaos existed for and devoted to the Chaos God Nurgle himself - it is here that "Papa Nurgle" resides in perpetual joy alongside his most favored demons, champions and victims upon whom Nurgle tests his many diseases upon.

Due to Nurgle's unique nature, he is very active in this reality and lovingly oversees the corruption of his Garden and those within it, he travels the twisted realm and spreads filth that his lesser demons feed on - he also stops to listen to the tales of any unfortunate souls who have strayed upon (and ultimately become imprisoned within) the Garden, from their tales of despair and misery Nurgle fashions new plagues and those Nurgle particularly enjoyed the stories of are taken by Nurgle to his great mansion, where they are granted the gift of harboring his newest diseases.

As a realm of concentrated decay and filth no mortal can hope to survive a visit to Nurgle's Garden without Grandfather Nurgle's blessing and those who try and doomed to die agonizing deaths as the air poisons them, the ground gives way under immeasurable tides of pus and the very souls of the foolish trespassers are ravaged and consumed.

Yet for those who are insane enough to ask Nurgle's permission a terrible but loving gesture is given by Nurgle and he grants the mortal freedom to walk his realm without fear of death, yet such generosity inevitably comes at great price as Papa Nurgle will doubtlessly wish to entertain his new guest, showing them the delights of his Garden and infecting them with all manner of disease and ailment as a sign of his affection, those unfortunate enough to truly impress Nurgle may even be "gifted" with the the touch of Nurgle's Rot - dooming them to an eternity in the service of the chaos god. 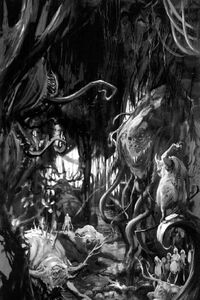 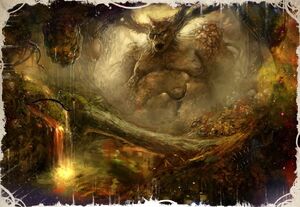 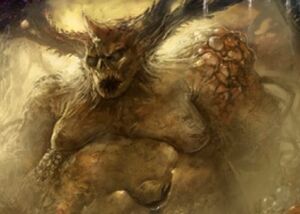 Add a photo to this gallery
Retrieved from "https://evil.fandom.com/wiki/Nurgle%27s_Garden?oldid=58357"
Community content is available under CC-BY-SA unless otherwise noted.