Heart of Onaga
Heart of the Dragon King
Dragon Heart

All of Onaga's draconic abilities

To forever serve as the fabled "Emperor" Onaga's vital organ as well as the very source of power behind his "undefeatable" Army (failed).

Onaga's Heart also called Heart of Onaga, the "Dragon King's Heart", or the "Heart of the Dragon King", is a bewitched heart organ of Onaga the Dragon King and it holds his legendary power to raise the dead. It made its debut appearance as a plot element in Mortal Kombat: Deception and later reappeared as a Krypt recipe item in Mortal Kombat 11.

It is the true source of power behind Onaga's "undefeatable" army. For unclear reasons and according to his myth, the heart is what allowed the Dragon King to constantly resurrect his legions of soldiers from death during battle. An ominous beating emanates from this still heart. Its power looms large.

The kombatants had beaten the Dragon King, but left his broken body unattended on the floor of his throne room inside his temple at Outworld's Dragon Mountain. Not long ago, a similar fate had befallen his aforementioned advisor turned most hated enemy, Shao Kahn, the Conqueror of Worlds.

Havik the Cleric of Chaos, came to the temple later ripped the still-warm heart from the carcass and ate it, thus absorbing Onaga's power of reanimation.

Had the Dragon King fulfilled his plans for total domination, the never-ending turmoil of life would have come to a stifling halt. Those who have overcome him believed that the realms were at rest once more, but Havik swore to restore the haos that once ravaged Outworld by bringing the late Shao Kahn back to life and to power.

Havik had given Kabal's new Black Dragon recruits a task: Lure the heroes away from Onaga's corpse while he somehow retrieved the heart, and with it, legendary Dragon King's power of rebirth.

Apparently Onaga's ancient army had only been invincible by means of constant resurrection during battles.

The power to resuscitate the dead would indeed prove quite very useful to the Black Dragon clan themselves.

Kabal himself was no more fool for he now saw the perfect opportunity at hand: he quickly slew Havik by stabbing h.in the back and grabbed the Dragon King's heart for himself before he can consume it. Havik was most impressed as he is somewhat smiling at him in his final moments before death. 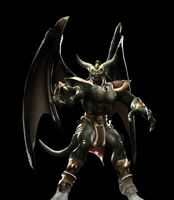 Onaga's Heart as seen in Mortal Kombat 11.
Add a photo to this gallery
Retrieved from "https://evil.fandom.com/wiki/Onaga%27s_Heart?oldid=113345"
Community content is available under CC-BY-SA unless otherwise noted.