Oogie's Lair, also known as Oogie Boogie's Lair, is a creepy underground cave full of torture devices with a casino-like appearance located beneath the Treehouse and it is the "humble" abode of the nasty bogeyman, Oogie Boogie. It where as he delightfully gambles on human (and in some possible cases, inhuman) lives with his dice. The lighting is done in the style of a cheap fun house, as seen during Oogie's song.

At their Treehouse home, the mischievous trio of friends, Lock, Shock and Barrel who send food (such as the insect caught during their "Kidnap the Sandy Claws" song and sometimes even victims for Oogie Boogie down a chute.

A few torture devices shown in the movie including a roulette wheel, gun-toting robots with slot machines for chests, mechanical playing-card soldiers with swinging swords, and a gruesome variety of other demonic contraptions.

It is where Oogie meets his demise after his final battle with his archenemy Jack Skellington who angrily pulled the string off the Boogie Man's burlap sack-like body for the shameful capture and mistreatment of his friends while rescuing both Sally and Santa Claus. After Santa Claus left to save Christmas in time, the Mayor of Halloween Town with the help of Lock, Shock and Barrel, found both Jack and Sally in Oogie's now empty Lair and they threw a pilot ladder at them as they came to their rescue.

Oogie's Lair appears as the final level of the prequel videogame The Nightmare Before Christmas: The Pumpkin King. It can found by nagivating through the colorful but decrepit bug-filled labyrinth beneath the Tree House to make to the lair and to enter the final confrontation between Jack Skellington and Oogie Boogie.

Oogie's Lair appears in the Kingdom Hearts video game under the name "Torture Chamber" (also called "Oogie's Torture Chamber"). This torture chamber-styled arena is located behing a small green-door room at Oogie's Manor. Inside the chamber, various gadgets and traps reminiscent of gambling tools can be found. The intruders are forced down to the roulette table, where razor blades and exploding dice are thrown down. In here, Oogie would meet his first defeat (similar to his death in the film). 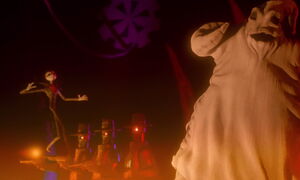 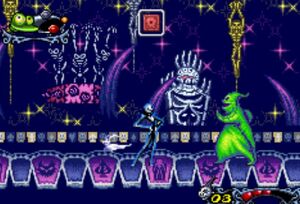 Jack Skellington battles Oogie Boogie in his lair in The Nightmare Before Christmas: The Pumpkin King. 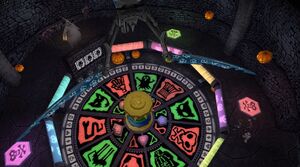 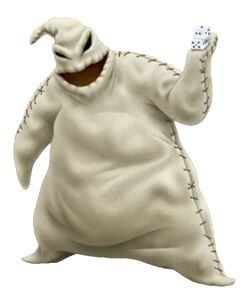 Oogie Boogie
Add a photo to this gallery

Retrieved from "https://evil.fandom.com/wiki/Oogie%27s_Lair?oldid=63702"
Community content is available under CC-BY-SA unless otherwise noted.