The Evil Wiki
Register
Don't have an account?
Sign In
Advertisement
in: Villainous Events, Genocide, Massacres,
and 6 more

The Order of the Sith Lords

To initiate the systematic destruction of the Jedi Order and all its Jedi apprentices.

To pave the way for the foundation of the Galactic Empire.

Order 66, also known as Clone Protocol 66, was a series of contingency orders of the Clone Soldiers of the Grand Army of the Republic. The order was that the Jedi Commanders and Generals of the Republic military were to be branded as traitors and were to be executed. The order was formally carried out by Supreme Chancellor Sheev Palpatine (also known as Darth Sidious) in 19 BBY at the very end of the Clone Wars and led to the destruction of the Jedi Order and the deaths of the majority of the Jedi and this very act led to the rise of the Galactic Empire with Sheev Palpatine as its founding "Emperor".

Order 66 was one of the various orders that was programmed into the minds of all Clone Soldiers that were bread as one of the various contingency orders that were programmed into the minds of the Clone Soldiers that were to be carried out upon its execution. It branded all Jedi Knights and members of the order as traitors and were to be executed as well. The command was placed within the inhibitor chips that all Clone soldiers had placed within them in order to make sure that all active Clone soldiers were to carry them out without hesitation. The order came after Order 65 which branded the Supreme Chancellor as a traitor and was to be removed and executed as well.

The first report of Order 66 being carried out was in 19 BBY when Clone Trooper Tup, had his chip malfunction and carried out the order prematurally. During the Battle of Ringo Vindo, Tup saw Jedi General Tiplar and walked towards her where he put up his weapon and shot her without hesitation. Her death led to the loss of Republic momentum and forced the Republic forces to withdraw from the combat zone. Tup was later brought onboard a ship to be brought back to Kamino for investigation but was captured by the Separatist forces but later liberated by the Republic. ARC Trooper Fives and 501st Commander Rex had launched their own private investigation and later found out what was really happening. Fives later attempted to tell Anakin Skywalker about what was going on but he was shot by Fox before he could do so and Rex became one of the only few clones to know about the order before its ordered execution.

Execution of the Order

After the attempted coup by Mace Windu and the Jedi Council against Palpatine, he would later use it as a justification to carry out the order citing it as an act against the Republic. After Anakin Skywalker came in and Palpatine made him his apprentice, he would later order the execution of Order 66 to Commander Cody of the 212th Batallion while he was on Utapau. Cody followed through with the order and ordered an AT-TE to fire upon Jedi General Obi Wan Kenobi which nearly killed him but did not. This would soon began Order 66 as other commanders would be given the same order all across the galaxy.

After the attempt on Obi Wan's life, Commader Bacara and the Galactic Marines were also given the order. During the Battle of Mygeeto, the longest battle of the Clone Wars, Ki-Adi Mundi was leading a small detachment of Marines against the forces of the Separatist Droid Army on a bridge when the order was carried out. He charged at the Separatist forces but stopped after he saw Bacara and a small group of Galactic Marines raise their arms on him. Confused, he quickly began deflecting the blasts after the clones began to fire on him but it was too much and Mundi was shot down and killed by his forces.

On the planet of Felucia, Aayla Secura became the next victim as her forces, lead by Commander Bly, turned on her as well. During the Battle of Felucia in an attempt to rescue Barris Offe and push the Separatist forces off the world, Secura stared down a convoy of Homing Spider Droids and Armoured Assault Tanks when she saw her troops raise their weapons at her. She tried to stop it but they were too fast and she was shot down and killed. According to records, her forces admired her greatly and wanted to give her a quick death as they were unable to deal with the pain because of how she saved them from certain death during the war.

Plo Koon became the next victim following Secura. During the Battle of Cato Nemoidia, Plo Koon was in his starfighter and was accompanied by two ARC-170s during an air battle where they were flying over the bridge cities. Palpatine gave out the order and Captain Jag carried it out. Without hesitation, Jag and the other pilots opened fire on Plo Koon and was quickly shot down and crashed on a nearby building on one of the bridge cities.

During the Siege of Selucami, Jedi General Stass Allie was on a BARC speeder bike and was accompanied by two clone troopers. Commander Neyo, one of the troopers present, had gotten the order and he and the other clone had backed up their bikes and fired on their Jedi Commander. The bike was destroyed and she was killed in the process with the remnants of the bike landing into the swamps of Selucami littered with the remains of fallen clones and droids during the battle.

Jedi Grand Master Yoda had sensed the deaths of all the Jedi and was horrified at what he sensed nearly collapsing as a result. He was present on the planet of Kashyyk during the Separatist invasion of the Wookie homeworld and oversaw a battle where Separatist forces attacked a beach outpost and engaged the joint Republic-Wookie forces in their defense. Luminara Unduli was killed by her Clone forces but Yoda sensed what was happening and killed both Commander Gree and another trooper during their attempt on his life.

Raid on the Jedi Temple

On Coruscant, a state of emergency was declared and the planet was placed under martial law. During this time, Anakin Skywalker, now known as Darth Vader, lead a large detachment of 501st Legion soldiers marched into the Jedi Temple. After killing a nearby Jedi Knight, Anakin and his forces marched forward in what would become Operation Knightfall. Their orders were to eradicate every single Jedi that was present including knights, padawans, and even younglings. This lead to a long and grueling battle which saw the destruction of the entire Jedi Order and the deaths of the majority of the Jedi.

Afterwards, a beacon was activated telling all surviving Jedi to return to the temple as a trap set up to kill any Jedi who escaped execution. Clone soldiers were stationed at the temple to kill all surviving Jedi who would return. The bodies of all slain Jedi were then brought up front of the temple where they were burned and the public was told that the Jedi had attempted to overthrow the Republic and this was the response to their supposed treason. This would later help eliminate most positive views of the Jedi amongst the public.

After Operation Knightfall had been completed, Jedi Knights Obi Wan and Yoda had returned to the temple where they fought off and cleared out the temple of the Clone forces stationed there. The two Jedi Knights would patrol the ruins of the temple where they had seen the bodies of all the slain Jedi and were horrified, especially after knowing that not even the younglings made it out alive. They then saw footage of Anakin leading the Clone forces, killing the Jedi, and becoming the apprentice of Darth Sidious as well. Obi Wan was devastated but knew what he had to do. He later de-activated the beacon and activated a new one instead ordering all surviving Jedi to stay away from the temple and went to confront Anakin on Mustafar.

Immediately after Order 66 and Knightfall, Obi-Wan and Yoda organized a last-ditch effort to defeat the Sith. Yoda was to kill Sidious on Coruscant, while Obi-Wan would go to Mustafar and kill Darth Vader. Both attempts failed. Yoda dueled Sidious to a draw but was forced to flee, knowing that Sidious would win if the fight continued. Obi-Wan was more successful, severing Vader's organic limbs and leaving him to burn by a river of lava. Vader survived, but was so terribly wounded that he had to be placed in the iconic suit of armor he would wear for the rest of his life.

There were some Jedi, however, who survived Order 66. Notable survivors include Master Yoda, Obi-Wan Kenobi, and Shaak-Ti. Eventually, Shaak Ti was hunted down and killed by Darth Vader's secret apprentice, while Obi-Wan Kenobi and Yoda trained Luke Skywalker the ways of the Force to resurrect the Jedi Order. Around 200 Jedi were recorded to have survived Order 66 and they ended up scattering all over the galaxy to remain in hiding. Eventually however, Palpatine was impatient and unwilling to allow these Jedi to survive and thus instigated the Great Jedi Purge which sought to eradicate the presence of the Jedi from the galaxy and for the extermination of every single surviving Jedi. 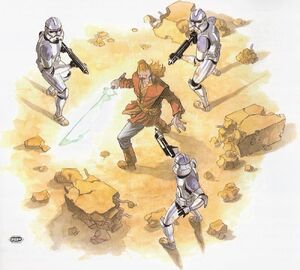 An unidentified Jedi General about to be murdered during Order 66 as seen in the Star Wars Miniatures book Ultimate Missions: Revenge of the Sith. 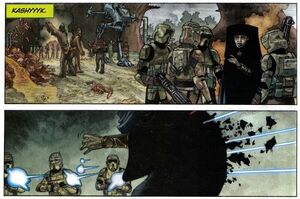