Thousands of years ago before Yu-Gi-Oh!

To gather enough energy from the souls of countless victims to revive the Orichalcos God.

To aid Dartz in his blind quest to turn Earth into an Atlantean paradise with the aid of the Orichalcos God.

The Orichalcos (in Japanese: オリカルコス, "Orikarukosu"), sometimes called the "Oreichalcos" (in Japanese: オリーカルコス, "Oriikarukosu"), is the term that refers to an ancient, mystical but evil energy in the Waking the Dragons story arc of the anime series Yu-Gi-Oh!. It appears in nearly all episodes of the season and is the true main antagonist of the arc.

The Orichalcos is a primal evil force that is said to be as old as time itself. It seeks to corrupt (and eventually consume) the souls of living beings and spread all forms of wickedness throughout the world, and possibly even the whole universe. It's power is apparently fueled by the darkness that resides in the the hearts of humans.

The exact details and origins of this Orichalcos are unknown, but thousands of years ago, the mysterious and mystical stone comprised entirely of the Orichalcos energy rained down upon the ancient kingdom of Atlantis. The fragmented pieces of the object became jewel-like stones, imbued the Atlantean people with ultimate knowledge and power. In just a few years, Atlantis became the most advanced civilization on the planet, far more advanced than the modern world of today. But unfortunately, as is human nature, with progress and power also comes corruption and greed. The people of Atlantis rapidly became selfish and power-hungry and soon, the stones of the Orichalcos began to expose the evil in them, turning those with darkness on the inside into monsters on the outside. When consulted, the Orichalcos tainted the mind of the Atlantean kingdom's ruler, Dartz.

The Orichalcos granted Dartz immense power and lent him supernatural soldier-like monsters known as the Orichalcos Soldiers to do his bidding. It also gave him control of a powerful beast, the Orichalcos God (also known as the Great Leviathan in the 4Kids dub), which would help him to destroy the world and create a new one that would be free of evil.

Ironheart and Dartz's daughter fled and called upon the world of Duel Monsters and its guardians, the three Legendary Dragons (in actuality, three soldiers whom Dartz had transformed into dragons) for help against the corrupted Dartz. One day, an army of benevolent magical creatures—including the three dragons—led by Ironheart met with Dartz’s army of evil Orichalcos Soldiers and the Great Leviathan, and the Battle of Atlantis took place. The battle concluded with neither side being victorious. The three dragons were frozen in ice, and the magical creatures were sent back to their own world. The bestial soldiers of the Orichalcos were destroyed, and the Great Leviathan drained of it's power and was sealed away from this world. The island of Atlantis sank beneath the sea.

For almost 100 centuries Dartz wandered the earth, collecting millions of souls and recuiting many followers to assist him.

The Seal of Orichalcos is a magic card infused with the power of the Orichalcos. It consists of an inner layer where there is a unicursal hexagram and an outer layer where the word "Oreichalcos" is inscribed in Enochian (though the text on the card itself reads "Orichalcos" in Enochian). This card unleashes the said mystical darkness' power of the player who is playing it. The Orichalcos itself can greatly affect the gameplay itself. Because of its power, many duelists lose one way or another, and one must also lose their own soul.

In the end, Yugi defeated Dartz and freed him from the Orichalcos' control. He also destroyed the Great Leviathan for good and freed all its captured souls, most passed on to the afterlife, while the more recently captured ones returned to their bodies. Though the Orichalcos still existed and presumably always will, without it's living avatars and corrupted servants, its influence on the world was most likely broken. 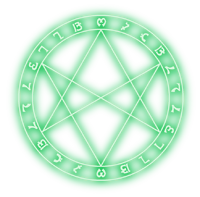 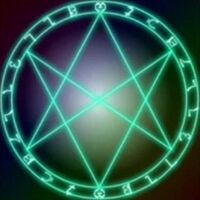 Orichalcos
Add a photo to this gallery

Retrieved from "https://evil.fandom.com/wiki/Orichalcos?oldid=121541"
Community content is available under CC-BY-SA unless otherwise noted.