The Evil Wiki
Register
Don't have an account?
Sign In
Advertisement
in: Villainous Tools and Other Items, Paranormal, About Villains,
and 7 more

Spirit Board
Talking Board

To conjure paranormal occurrences or to curse people upon conducting seances with spirits.

The Ouija Board, otherwise known as the Spirit Board or quite frankly, the Talking Board, is a flat board that is marked with the letters of the alphabet, as well as the numbers 0-9. This board also comes with a small heart-shaped wood piece called the Planchette which is used in seances whenever a spirit is said to write a message on the Ouija board. Ever since it's first appearance and the rise of its controversy, the Ouija board has been attacked by some religious groups who claim that these boards served as a means for demonic possession, and as a result, many of these boards were burned in huge bonfires alongside the Harry Potter books in countries such as Alamogordo, New Mexico.

Following its commercial introduction by businessman Elijah Bond on July 1, 1890, the Ouija board, despite its unspecified real origins and first creation within China in the year 551 B.C., was regarded as a parlor game unrelated to the occult until American spiritualist Pearl Curran popularized its use as a divining tool during World War I.

Spiritualists believed that the dead were able to contact the living and reportedly used a talking board very similar to a modern Ouija board at their camps in Ohio in 1886 to ostensibly enable faster communication with spirits.

Since early in the Ouija board's history, it has been criticized by several Christian groups including Roman Catholics. Catholic Answers, a Christian apologetics organization, states that "The Ouija board is far from harmless, as it is a form of divination (seeking information from supernatural sources).".

In 2001, Ouija boards were burned in Alamogordo, New Mexico, by fundamentalist groups alongside Harry Potter books as "symbols of witchcraft." Religious criticism has also expressed beliefs that the Ouija board reveals information which should only be in God's hands, and thus it is a tool of Satan. A spokesperson for Human Life International described the boards as a portal to talk to spirits and called for Hasbro to be prohibited from marketing them.

Bishops in Micronesia called for the boards to be banned and warned congregations that they were talking to demons and devils when using the boards. 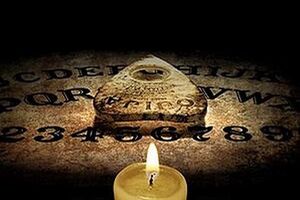 A Ouija board.
Community content is available under CC-BY-SA unless otherwise noted.
Advertisement