The Evil Wiki
Register
Don't have an account?
Sign In
Advertisement
in: Articles under construction, Mature, Evil Realms,
and 6 more

Conquer and annex realms to expand (under Onaga the Dragon King and Emperor Shao Kahn).

Outworld is a preternatural ancient imperial world that is one of fictional realms within the Mortal Kombat universe the and serves as the 2 main settings alongside Earthrealm in the Mortal Kombat fighting videogame franchise. Part from evil rulers, the Realm of Outworld acquired as the worst place with large number of killing and executions which could be found there. The realm's landscapes, with a few exceptions such as the Outworld Marketplace, consists of numerous hostile regions like spiky mountains with hollow caverns that hides danger, palatial castles and fortress-like temples full of traps, deadly forests consisting carnivorous plants, and jungles with predators, etc.; places obviously not fitting for settlement. The architecture of villages, towns and cities is alike with Asian civilizations of Earth.

Millions of years before, Outworld was first ruled by Onaga being an independent realm. At Onaga's reign the realm was oppressed but was internally stable. Outworld during this time was allied with Orderrealm. But when Onaga was assassinated and his kingship is stolen by Onaga's advisor Shao Kahn, Outworld had turned into aggressive and invasive realm with expansionist tendency. When Khan's elite fighters win Mortal Kombats, barrier/border between realms vanish, allowing Shao Kahn's military forces to invade defeated realms and merge vanquished realms into it. But even after winning Mortal Kombat, native people of the occupied realms do not willingly submit to Shao Kahn's tyranny, so waging constant military campaign against natives of the annexed realms is inevitable. But Outworld's imperial military is simply too powerful to be opposed, and good natives were forced to leave their homeland.

Because the realm is an empire made from many forcibly annexed realms, relationships between states within Outworld empire is very poor at best, and outright internecine at worst. Due to this mutual hostility existing between states, the emperor must constantly step in and keep the stability of empire by applying brute force. The last annexation of realm after Outworld's Mortal Kombat victory was Edenia. Because of numerous discords and chaos Shao Kahn had sowed in the name of expansion, Orderrealm had broken its ties with Outworld. Outworld, in turn, has an unofficial alliance with Chaosrealm, and Chaosrealmers were all too content with Shao Kahn's spreading of chaos, often working as mercenaries for the tyrant. After annexing Edenia, Outworld has it sight on Earthrealm.

But Earthrealm proved to be very difficult and defiant little realm to conquer: 500 years ago, Outworld nearly succeeded winning the Mortal Kombat but was thwarted by a fighter from Earthrealm named Great Kung Lao. Enraged by the loss, Outworld employed Goro, a mighty and fierce Shokan prince who killed Great King Lao in the Mortal Kombat 50 years after Earthrealm's victory. From that point on, Goro reigned as Outworld's champion for 5 centuries, until in the 10th and what might have been final tournament for Earthrealm Goro was defeated by a fighter named Liu Kang who represent Earthrealm. Outraged by the second near-miss, Shao Kahn ordered his Tarkata unit to launch an assault on Shaolin Temple, forcing Earthrealm and its guardian deity Raiden to agree to the new MK tournament held in Outworld with new sets of rules (outcome decided in a single tournament instead of system of 10 matches per 5 decades). But Liu Kang once again bested Shao Kahn and his Outworld fighters.

Unwilling to accept defeat, taking advantage of 'cracks' in the MK rules/system (merging realms is against MK rule, but invading realms are not) Shao Kahn launches invasion against Earthrealm, but for the third time Shao Kahn was defeated by the resistance from fighters of Earthrealm. In alternate timeline Earthrealm also won against Outworld but with debilitating losses of lives.

After the fight of Earthrealm, the demise of Shao Kahn caused the rebellions of Outworld to wage a bloody conflict by power-driven indivuals, and criminals factions remnants taking refuge in this realm. Years later, Outworld is ruled by Onaga again to Shujinko kill him for good and begin ruled by Shao Kahn again.

In Mortal Kombat X when Shao Kahn is dead, Outworld is ruled by a native member of the Osh-Tekk warrior tribe named Kotal Kahn when his homeworld was merged with that realm. Both Earthrealm and Outworld realize that antagonizing each other would do them no good, the two former enemies made a non-aggression pact. But grudges and enmities between the two remain.

In Mortal Kombat 11,after Shao Kahn (Past) was blinded by Kitana from the past,she told Kotal Kahn that the throne is secured. But Kotal was heavily crippled by Shao Kahn and proclaimed Kitana as the Empress of the Outworld. Kitana Kahn,alongside with her allies and the redeemed Baraka and Sheeva will fight against Kronika and her minions.

Edenia, a foreign magic world that was forcibly merged with Outworld by the tyrannical warlord Emperor Shao Kahn centuries ago. 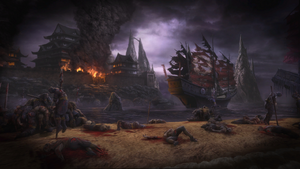 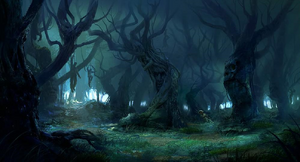