The Overlook Hotel is the main setting of the Stephen King novel "The Shining" as well as the movie adaptations - it is also arguably the central antagonist of the story despite the role often being associated with Jack Torrance.

The Overlook Hotel was built on an Indian burial ground between 1907 and 1909. It was considered cursed and had a violent history involving mass murder. The secluded nature of the hotel coupled with these beliefs made it somewhat infamous even in-story but Jack was not put off by what he considered mere ghost stories and decided to head to the Overlook Hotel regardless as a refuge. However the stories were far from fiction and soon Jack found himself going slowly insane, the Overlook Hotel manifesting various illusions including ghostly residents only Jack could see.

One of the main questions (that is deliberately left unanswered) in the film are whether Jack is indeed going insane or if he is being influenced by a paranormal force: the reality may well have been both. However, the fact that the apparitions of Delbert Grady was able to unbolt a locked door at one point, and that the apparition of Mrs. Massey was able to physically strangle Danny, would strongly imply that the apparitions in the hotel were indeed spirits and not just the characters' imagination or insanity.

In the novel, it is clearly stated that Jack has been corrupted by the evil power of the Hotel, the narration making a clear distinction between the things he has become, which is referred to as the "Monster", and the loving husband and father who resurfaces a short while before the hotel's destruction. The hotel is only destroyed in the novel and the TV series adaptation. However, in the 2019 sequel to Kubrick's version of The Shining, the hotel is destroyed by a grownup Danny Torrance after the defeat of Rose the Hat, the dark leader of the True Knot.

In the sequel Doctor Sleep, the Overlook Hotel has been replaced by a small inn and a watchtower known as the Roof O' the World. It's here that a now adult Dan Torrance and his shining-powered niece Abra Stone have their final showdown with the remaining members of The True Knot. 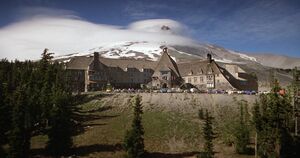 The Overlook Hotel as seen in the 1980 movie The Shining.
Add a photo to this gallery

Retrieved from "https://evil.fandom.com/wiki/Overlook_Hotel?oldid=96530"
Community content is available under CC-BY-SA unless otherwise noted.