The PX-41 is a dangerous mutagenic formula engineered within the top secret PX-Labs located in the Arctic Circle. It plays a major antagonistic role in the animated movie sequel Despicable Me 2.

The PX-41 is capable of turning any living things in the world into a purple, furry, indestructible, mindless, killing machine that is so dangerous that it can destroy anything in its path. Used on a rabbit, Minions ,Eduardo, and the three kittens in the short Panic in the Mailroom. The effects of the serum can be counteracted by PX-41 Antidote, an antidote serum that was invented by Dr. Nefario.

Inside laboratories in the arctic circle, trying to test the serum on a small rabbit which quickly became a terrible and vicious wild beast, which fiercely attacked the scientists.

The Minions (or also called Evil Minions) are for all intents and purposes, made to be indestructible: they are immune to weapons like flamethrowers, guns, axes, and undercover police cars; and are able to withstand the explosion from swallowing a bomb. They will devour and destroy anything that gets in their way, including the above-mentioned weapons. Evil Minions can also repair themselves, and are very dangerous.

El Macho, bemoaning that he and Gru are unable to work together, moves to kill the ex-villain by drinking a vial of PX-41 and transforms into a larger, stronger and fatter monster. Gru attempts to take down the monster but realizes that he has ran out of the antidote jam. The mutated El Macho roars and tries to smash and kill Gru and the latter tries to freeze El Macho with his Freeze Ray, but El Macho gets rid of the ice by smashing his arms against the ground. Gru falls onto the ground and El Macho picks up a huge metal bar to kill Gru. Gru suddenly finds Lucy's lipstick taser in his pocket and electrocutes El Macho, successfully defeating him. As the minions allude to getting their revenge, El Macho claims that he is not scared of their jelly guns, but Dr. Nefario incapacitates the mutated villain with the fart gun, knocking him out.

In the short Panic in the Mailroom , when the minions trying to save kittens from being devoured by one of the Evil Minions, this the end of the episode manages to heal from the effects of the antidote, but later a spilled drop of antidote you accidentally drop the kittens , transforming into giant purple beasts.

The PX-41 appeared as a new item in a recent update for Minion Rush, Unlike other items, it does not spawn during runs, however, an icon resembling a chemical bottle with purple liquid can be seen on the bottom left corner of the screen. When this is tapped, the player's Minion becomes an Evil Minion. They can then run around frantically destroying anything for a few seconds. 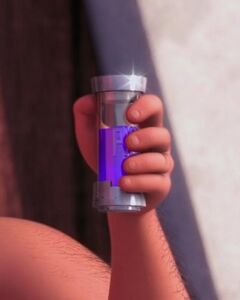 A canister of PX-41.
Add a photo to this gallery
Retrieved from "https://evil.fandom.com/wiki/PX-41?oldid=115199"
Community content is available under CC-BY-SA unless otherwise noted.