Palamecia is a bewitched medieval-esque country lorded over by the despotic Emperor Mateus who tainted the land's namesake royal Empire and its citizens with evil, turning the nation itself into a merciless war-mongering dictatorship on his selfish path of total domination, and it is a location in Final Fantasy II. It is fertile green land surrounded by its mountainous and arid desert. The imperial fortress known as Castle Palamecia, serving as the Palamecian Empire's focal point, is found on the impregnable mountain ranges nearby within the Palamecian heartland, making the building naturally difficult to get in or get out. Just south of the mountains where Castle Palamecia is lies the kingdom's very own Coliseum, surrounded by forests and deserts within the Palamecian territory, where it is utilized for competitions of soldiers against monsters, as well as for it being an expedient prison indeed. Somewhere a bit far away from Palamecian borders is a refueling station for the Empire's aerial war-machine dubbed Dreadnought.

A cold madman whose name is Mateus, after practicing and mastering dark magic, rose to power and crowned himself "The Emperor", began building a mighty army of summoned demons from the depths of Hell. He soon subjugates the kingdoms of Deist and Kashuan and this army of darkness eventually reaches the kingdom of Fynn. Despite the Fynn citizenry's resistance, they are overrun due to the coawrly aristocrat Borghen's defection to the Empire of Palamecia. The city's terrible conflict comes with heavy casualties blamed squarely on the Palamecian Empire themselves.

At the height of its power, the Palamecian Empire now controls the entire southern portion of the continent, with their reign extending as far as the city of Fynn. For the most part, their rule went unopposed, although the Wild Rose Rebellion is seen as a formidable threat. During Emperor Mateus' recent and ongoing rampage, the opposing settlements Bafsk, Kashuan, and Fynn are being occupied by imperial soldiers with the former being used as the place to construct the airship Dreadnought. The Empire ultimately crushed the cities Gatrea, Altair, Poft, and Paloom after they created a machine-like castle within an artificial tornado called the Cyclone, while the Wyvern-riding group of knights called Dragoons at Richard Highwand's hometown Deist were wiped out in a genocidal act via poisoning the water source on the island, another crime committed by the doomed Empire of Palamecia in the name of their false King, Mateus.

Meanwhile, unaware Emperor Mateus would meet his ultimate end in 4 young souls—Firion, Maria, Guy and Leon—who are left for dead after being attacked by his royal Black Knights. While Firion, Maria and Guy are saved by the Wild Rose Rebellion and join the benign organization to fight back, Leon is captured and becomes the Emperor's right-hand Dark Knight. 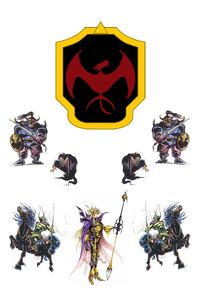 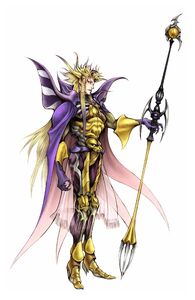 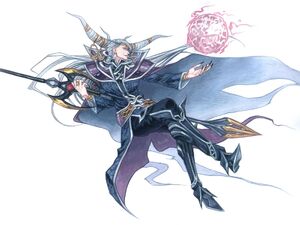 Mateus
Add a photo to this gallery

Retrieved from "https://evil.fandom.com/wiki/Palamecia?oldid=96499"
Community content is available under CC-BY-SA unless otherwise noted.